I wish I would have said something… 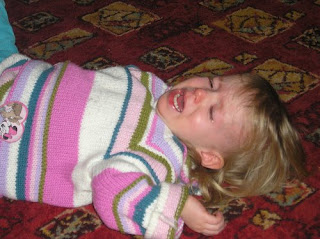 I was waiting in line behind a woman and her two daughters at Target last week. One little girl was about four and the other around two. While the mother waited in line for her turn, the two-year-old took one step away from her mother’s side. The four-year-old then jerked the two-year-old’s arm roughly and shoved her onto the ground. I watched in stunned surprise as the little one’s hat went spinning off up the aisle and she cried out in pain. The mother turned and picked up the now-sobbing little one. She immediately asked the older sister why she had done such a thing. Their conversation went something like this:

“Because she was running away.”
“She was not running away. And as a punishment, you need to put that candy back that I was going to buy you.”
“But I want the candy!”
“No, put it back.”
“I’m really sad now, mommy. Please can I have the candy?”
“No.”
“Wahhhhhhh!”

Okay, you get the idea. Anyway, this conversation continued for several seconds, although as any parent knows seconds feel a lot like hours when dealing with a screaming child. The mother held firm, despite the girl throwing herself on the ground in a full-blown tantrum.

Passersby stared at the unfolding scene. But as I looked around the area, most of the people looking on had sympathetic expressions on their faces. Their eyes seemed to say “We’ve all been there, done that.” An older couple behind me conferred in whispers, quietly approving the young mother’s “tough love” approach.

I picked up the younger one’s hat, which had landed at my feet, and brushed it off. As I handed it to the mother, I had an overwhelming urge to whisper “You’re doing a great job, mom. Keep it up.”

But instead I just said, “Here’s your little girl’s hat.”

“Thank you,” she murmured.

The line moved agonizingly slow, the child’s crying grew louder, and the mother remained stoic. The customer in front of them completed their transaction and moved away. The mother suddenly squatted down, asking the girl again why she had been so mean to her younger sister.

The child reiterated “because she was running away.” Then continued whining about the candy.
The mother stood up and sighed. Her items moved up the conveyor belt and she reached over, plucking a candy bag off the rack, and tossed it onto the conveyor.

“I get the candy now, Mommy? Oh yeah! I get the candy now!” the little girl cried. Tears immediately dried and she was all smiles now. Their purchases complete, they moved toward the exit. The girl dancing and bouncing up and down in delight. I was shocked. I couldn’t believe she’d caved! I glanced back at the older couple and noted their shaking heads.

“I guess she ended up getting her candy after all,” the cashier commented, as she rang up my purchases.

It was such a disappointing letdown! That mom had almost made it. Unfortunately, all she did was reinforce those negative behaviors in her child. Now her four-year-old knows without a doubt: crying, screaming and tantrums equals reward.

I wish now I would have followed my instincts and said something. Maybe given that mom a little whisper of encouragement, assurance she was doing the right thing. It can be tough when we parents feel like we’re out in the trenches alone. When we feel like everybody is staring and assume that nobody knows what we’re feeling. Sometimes we forget we’re surrounded by many parents who have “been there and done that.” Even we parents of teens need to remember this--and remember to support each other when the tough times hit. Be there to whisper those words of encouragement, or even to shout them…

“Keep up the good work!”

I wish I would have said something…

That is so sad the kid got the candy. I was reading your story with anticipation. You are such a good writer. I often get that overwelming urge to say something to someone for encouragement or prayer and often pass up that chance the holy spirit gives me and yet ask for it again. Oh well, we just know that we will always have more chances and maybe next time we will say something:) Kim W.

I agree - I'm also disappointed that she gave in. I often do say a word or two (like 'it's hard, isn't it) or at least give a look of solidarity and it DOES help most people going through it.