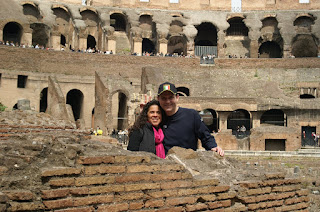 And now, our story continues…

There are some advantages, for a family of four, to staying in an apartment rather than a hotel when vacationing in Rome. And then again, there are some disadvantages.

Hey, mama’s on vacation too! Fortunately, my hubby was intuitive enough to recognize this fact and sweetly took over these dreaded domestic tasks. (Yeah okay, intuition probably had less to do with it than my whining that there was NO WAY I was gonna be spending my vacation cooking and cleaning!) So the menfolk went to work.

Here is Joshua being very brave, stretching over our 7th floor balcony to use the Italian dryer. 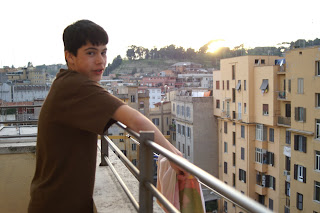 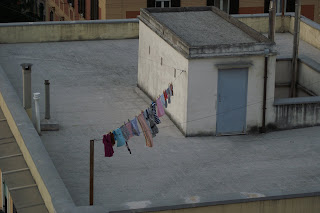 And although we gave it our best effort, man cannot live on gelato alone. So after shopping at a local grocery store, here’s my darling hubby, whipping us up a lovely steak and tortellini Italian dinner… 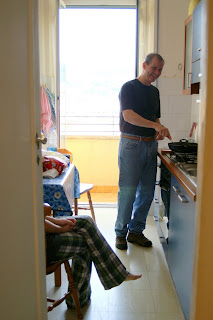 But, back to our sightseeing expeditions…

After exploring the Vatican and St. Peter’s the previous day, we set out to investigate some other well-known sites of Rome.

Located at the end of the Via dei Fori Imperiali, (sounds really cool, right—it’s just the name of a street!) lies the Colosseum. The construction of this primo entertainment center was finished in 80 A.D., and the Emperor Titus declared a 100-day holiday to celebrate its completion. 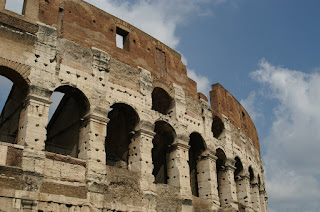 Seventy-thousand people would gather several times each week to watch the fatal gladiator fights held there. Our tour guide, Maura, explained that about 85 percent of the gladiators were slaves, and forced to fight. In addition to gladiator fights, sometimes the arena was filled with water for naumachias (real sea battles) re-creating great battles of the past. They only held a few of these though, because the Colosseum wasn’t really designed to be filled with water and these battles were ruining the foundation. 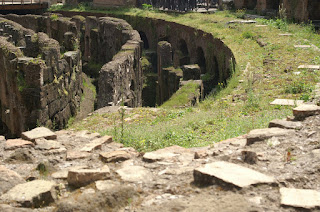 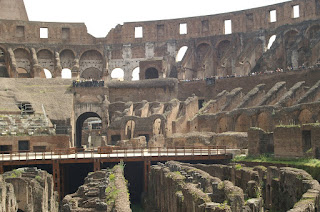 Near to the Colosseum is the Roman Forum. I always thought the Forum was an individual building, but it’s actually a large area which encompassed several elaborate temples, triumphal arches, and monuments. It was a hub of activity in ancient times. Here’s the view from the top of neighboring Palatine Hill. 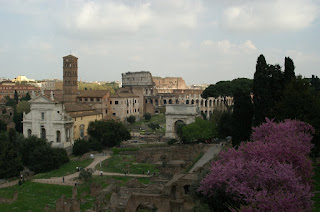 Here is the Arch of Constantine—built in honor of the first Christian-sympathetic emperor. It’s one of the best-preserved arches from ancient times. 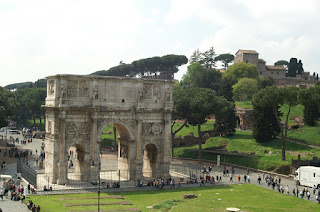 The Arch of Titus was completed by his Titus’s brother and successor, Emperor Domitian. 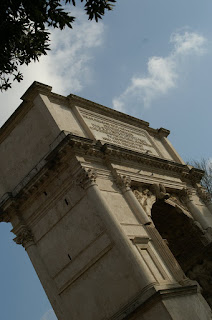 And here is the Temple of Antoninus Pius and Faustina. When the Emperor Antonius Pius lost his wife, he wanted to deify her and built this temple in her honor in 141 A.D. It’s the best-preserved building in the entire Forum. 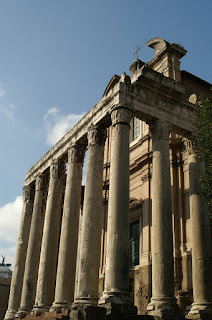 The Temple of Castor and Pollux was built in 484 B.C. Can you believe people just hurry past this stuff on their way to work every day? 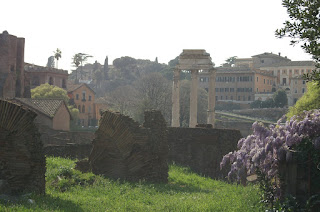 The Temple of Vesta ( 8th century B.C.) was built to guard sacred objects, including the “eternal flame.” It was believed that as long as the flame burned, Rome would stand. 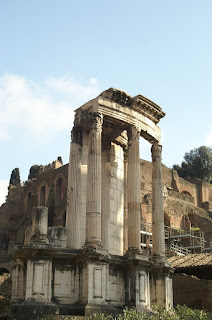 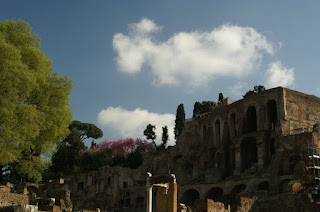 On the downside, they had to remain virgins for 35 years. (Lifespan was around 45 years back then.) If one of them let the eternal flame go out? Death! If one broke her vow of chastity? Really horrible death! Buried alive. In the interest of fairness though, the guy doing the deed didn’t get off lightly. He was skinned alive. Yuck! Let’s move on…

We also took a guided tour of Palatine Hill, home to the majority of Rome’s emperors. As I mentioned before, it overlooks the Roman Forum. Lots of lush vegetation. These are the beautiful Farnese Gardens. 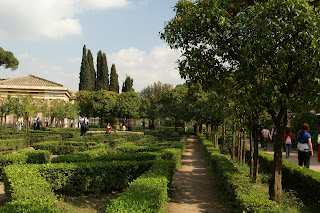 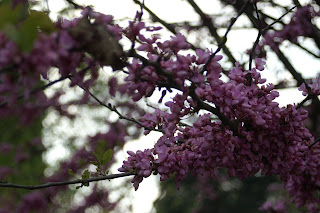 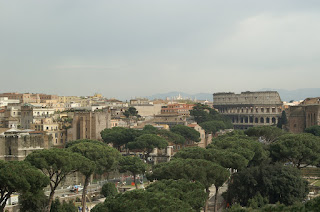 Augustus was the first Emperor to make his Imperial residence on Palatine Hill around 700 B.C.—just a really nice house. The Emperor Tiberius built the first palace there. But the Emperor Domitian built the first truly extravagant palace on the hill. He had the entire massive structure encased completely in marble both inside and out. Here we are stepping on a piece of the original marble flooring that remains. 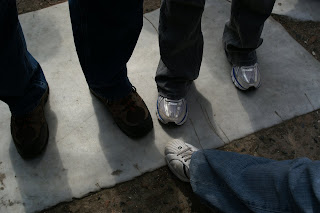 Emperor Domitian’s palace contained this private arena where he and 30,000 of his closest friends could view their own private chariot races and gladiator fights. 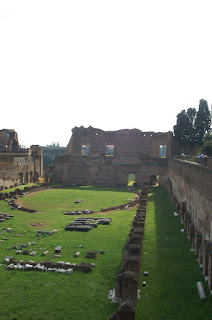 And here is the symbol of Rome: A she-wolf taking care of the twin boys, Romulus and Remus. 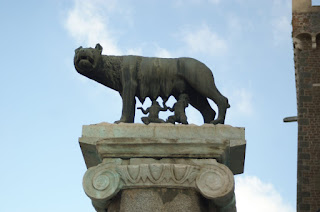 One legend about the origin of Rome goes like this:

Rhea Silvia, daughter of king Numitor, was a Vestal Virgin. She got pregnant. Oops! Rather than risk the whole “being buried alive” thing, she claimed she’d become impregnated by Mars, the God of War. Nobody wanted to tick off the God of War, so they didn’t kill her—just decided she’d have to get rid of the baby. She ended up having twins, Romulus and Remus, who were sent down the Tiber River to die. Allegedly a she-wolf who’d recently lost her cubs found and cared for them.

When they were older, there was a competition to determine which of the twins would become the king of Rome. Remus won, but Romulus got mad and killed his twin, thus Romulus became the king, and that is how Rome got its name.

Skeptics always thought the story of Romulus and Remus was a myth, but in the fall of 2007, archaeologists unearthed a sacred sanctuary dedicated to Romulus and Remus beneath the House of Augustus near Palatine Hill. Hmmm…very interesting.

To end our busy day, we took a night walk starting at the Spanish Steps. 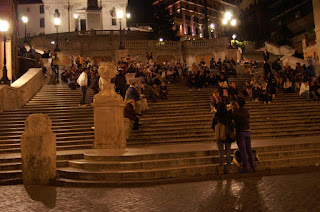 From there we hiked over to the incredible Trevi Fountain. 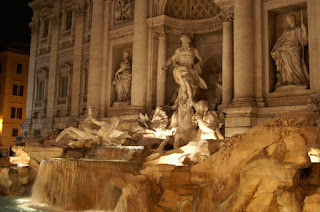 There was a fairly young crowd there at night—lots of young couples and stuff. I noticed one young Italian girl making eyes at my boy and trying to sneak a picture of him with her cell phone camera when he wasn’t looking. Back off, honey!

We tossed our coins in over our shoulders, ensuring we would come back to Rome again some day. 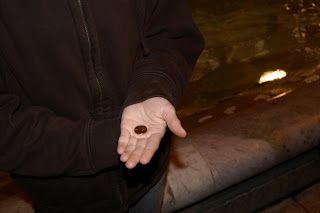 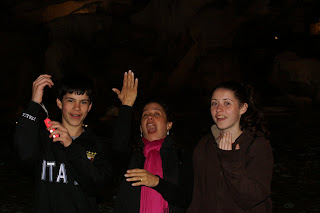 Last, we meandered past the Colosseum and the Roman Forum again, snapping some cool moonlight shots that are definite keepers. 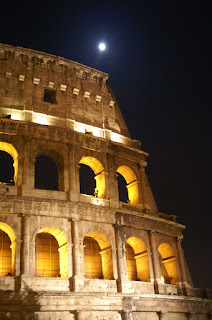 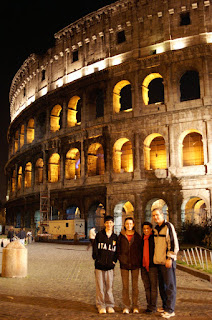 And last but not least, more gelato! 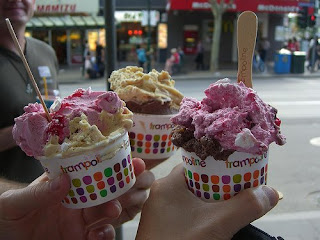 A quick earthquake, and then time for bed. Stay tuned for the next episode when I’ll share more cool sites, apartment plumbing issues, power outages, and more!

Now you've got me wanting to visit Rome! Especially if my men take over the laundry and cooking chores. 'Cause I'm not too sure I can handle the clothes drying technology they have over there.

Mmmmmmm.....gelato! Thanks for sharing your pics and stories--so interesting! I'm looking forward to the next installment!

Loved the advantages and disadvantages. Next time, take me with you!

What gorgeous pics - you've made me remember my trip with much nostalgia! Rome and Athens were my favourite cities as a teen - I was really into ruins and the glory of what was.