Woman of a Certain Age 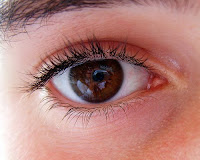 One morning in January, I was looking in the mirror and noticed something strange. There was this definite bag underneath my left eye. That's weird, I thought. However, I'd gone to bed late the night before so I dismissed it as a lack of sleep thing. Several days went by, then a month, and I realized the bag was still there. I finally figured I'd better get it checked by an ophthalmologist. Of course, by this time my imagination had gone wild. What if I had some rare form of eye cancer? What if there was a tumor growing under there?!

My hubby attempted to comfort me the day of the appointment, telling me they'd probably just prescribe some eye drops and I'd be good as new. I nodded glumly, not believing him for a second as he hugged me and sent me off to the appointment. I was dreading the diagnosis. I had just secured an awesome new writing gig and I envisioned being forced to turn the project down now since I wouldn't be able to see as I underwent eye cancer treatment.

I dragged myself into the office, feeling incredibly depressed while they did all that torturous eye drop stuff they always do. The yellow numbing drops, eye pressure check, then the dreaded pupil dilation. (I hate that! Not only did I maybe have eye cancer, but I wouldn't be able to read for the rest of the day!)

Finally the doc came in. He asked me a bunch of questions, thoroughly examined each eye, then pulled up a stool and sat beside me. He looked as if he'd known me better he may have taken my hand to give it a comforting pat. I waited with trepidation, already thinking the worst. But nothing, nothing could have prepared me for what he was about to say.

"Well, Holly," he began, looking me directly in the eyes. "There are, er…certain things that happen to the human body over time. Now, it's not uncommon for men and women of a certain age to develop things like, well, like bags under their---"

"Whoa, whoa, whoa!" I held up my hand and stared at him, mouth gaping. "Are you telling me that this…this bag that just suddenly appeared under my eye is an 'old person' thing?

He looked uncomfortable. "You're not old," he clarified. "It's just that as people age, it's not uncommon for them to develop bags like this under their eyes. Now, I definitely don't think you're at the point where you'd want to consider Botox or plastic surgery of any kind…"

He kept talking, but I'd stopped listening. Here I was thinking I might have some rare disease and it turns out my stupid bag is because I'm a "woman of a certain age" and these things just happen?! I couldn't believe I'd made a doctor appointment for a normal sign of aging. Ugh!

At dinner that evening, my family politely asked about the results of my appointment. I cleared my throat, raised my chin and shared the diagnosis. I have to give my husband some credit; he at least had the grace to suppress his smile, but not my kids. They laughed uproariously. And kept laughing. (All right, enough already.)

Periodically throughout the meal, while I was talking or sharing a funny story, my son would surreptitiously place his index finger beneath his left eye and look at me with a smirk, the new universal sign for "No more goofy stuff now, mom. Remember, you're old." I finally dove across the table at him but he just darted away, laughing. Little brat!

Well, I don't care. I've always said I refuse to call myself old until I hit 90. Maybe not even then. I'll just continue on my merry way, acting like a kid if I feel like it, under-eye baggage and all.

OMG LOL... dang it right! crapola!... geez I would be so depressed.. you have such a great sense of humor.. funny how he grabbed your hand cuz us women of certain age HELLO will go bonkers.. don't even go there LOL

Sorry to hear about your bag

I thought an age spot was skin cancer. The dermatologist set me straight. I'm not old either, by the way.

You'd think you body would have the grace to put a bag under both eyes at the same time, so at least you would be balanced. (tee hee) Welcome to the "Women of a Certain Age" Club, daughter.

Oh Holly! I laughed out loud....over and over! I am so glad that it is not eye cancer and that you will be able to write for a long, long time! Even if you have to look past that bag to do it. (I love that you are just a little ahead of me, so I can laugh now and cry when it's my turn) I am not going to be old until 90 either. Great post!

I am sure I'll be in this boat one day. And the person who laughs firsts gets to pay for the plastic surgery. :]

First you are definitely not old! So tell your kids to shut it and go to bed without dinner! :)

I actually have an amazing eye cream I use that helps my bags (yes, I have them too at 27)

Stay strong, momma, and think young (it's all in your mind).

Oh no! Isn't it terrible how we start thinking the worst when we notice little changes like this. My children are definitely not shy with their comments about my appearance on any given day and keep me totally grounded!

My dad always used to say "You're as young as the woman you feel" - of course this was his excuse to keep dating younger women LOL....

Ha ha, My turn to welcome you to this club! Remember my perimenopause awakening? LOL!

I have a stubborn bag as well. However it is so pendulous, it nearly shuts that eye when I smile. Certain friends have said I look drugged (or high) in my pictures. It's awful. I always wanted to embrace my age but plastic surgery is starting to sound desirable! I'll go when you go!

LOL! I'm sorry that happened to you. Keep your head up!With age comes wisdom, right? I may not be to that point yet, but from the moment I turned 30,THINGS have been changing and not in a good way!I'm now 31 and next week I have a STRESS TEST??? UGH! I'm too young for this! Thanks for stopping by my blog! I appreciated your comments! Come back again!I'm now following you!
Jessica
Walking the Land
http://Jessicanfamily.blogspot.com

This made me laugh so hard!! My daughter actually did get a bag under her eye that ended up being a very serious thing (that could have been deadly), so I'm very relieved yours is only this.

Still - the fact that he would talk about botox and facelifts...even if only to tell you you aren't there "yet", *shudder*

Oh, you make me LAUGH!! (Which probably adds to the bags under MY eyes, as I am definitely - ahem - of a certain age!) I love that you're not afraid to blend normal fears with humor...and I mean that in a good way, as a writer who aspires to do the same.

This happened to me, too. We must be of the "certain" age. I have found that lowering the sodium in my diet and avoiding sugar improves it. Colds, allergies, stress, and staying up late make it worse.

I guess we'll just be crinkly, wrinkly, and baggy. Sigh.

Thank u for sharing this! And thank goodness it's not cancer. I can totally relate. About 6 months ago these little weird lines started appearing under my eyes, I almost had a mental breakdown! LOL. I was under the false assumption 'aging' was going to be a smooth process, but apparently u wake up one morning & things are just 'different.' ugh. Oh well, at least we FEEL 25, right? :)

Oops! I forgot to add my name on that last comment. Sorry! It's my old age, I tell you! ;)

Ha, ha! Thanks, Monica. And yes, in my imagination, I'm still just fresh out of college! ;o)