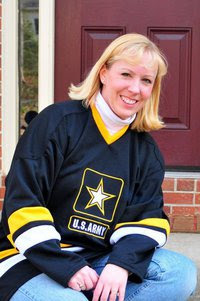 As many of you know I posted a review of the book, Some Kind of Normal on my blog last week--I just loved it! The book was written by debut author Heidi Willis who kindly consented to an interview. So now, curious readers and aspiring authors want to know…

1. Was Some Kind Of Normal the first novel you ever wrote?

No. Right before I wrote Some Kind of Normal I wrote my first real novel, a book I titled Ocean Deep. It took over two years to finish it. I queried and got three immediate requests for partials, and then three immediate rejections. I realized it still needed a lot of work and I might have worked on trying to revise it but then I'd gotten the idea for Some Kind of Normal, and that just took over.

2. How long did it take to finish Some Kind of Normal?

It ended up being about seven months, but I worked much harder and longer on it than I had the previous book I'd written. Instead of writing when I had time, I made a decision to view myself as a writer instead of a mom who sometimes wrote. That made a huge difference in helping me make priorities and sacrifices. Also, that year all three of my kids were finally in school. :)

3. To outline or not to outline?

I'm firmly of the belief that every writer should do what works for them. I was a pantser on my first book and discovered that it absolutely doesn't work for me. I combine two different outlining approaches. I divide the story into three acts, and also divide it by percentages. At each point, I know something has to be happening to move the story forward, so I have those basic events in place. After that, I just let my characters take over. Even though I have some idea about where I'm going, I still face tons of surprises as I write! For a better description of my "outlining" process, you can check out my blog: http://heidiwillis.blogspot.com/2009/05/methodology.html

4. I understand you're part of a writing group. How did you find them?

My writing group is fantabulous! I think Heidi Bailey is the first person I met online, and that was through Nathan Bransford's blog back in early 2008 or late 2007. Then Jen Blom found the two of us through blogs and that started the core of our group. Erin Halm and Brit Lary were in another online writing group I'd joined in 2008. They were by far the two most dedicated and talented writers in that group, so when Heidi and Jen and I decided to start our own group, I asked Erin and Brit to come with. Jen had two other fantastic writer friends, Kerri and Marsh, she brought along, and there we were! We span three continents, but we write each other every day and have become close friends as well as colleagues.

5. Your characters and their relationships are so authentic. Where did the voice of Babs come from?

I have no idea where Babs came from. She just showed up the day I sat to write. She is unlike me in almost every way, and unlike anyone I know. I have to admit that for a while, I was a bit afraid of her. She'd say things and I'd delete them, thinking "You can't write that! Do you know how many people you'd offend with that?" And then I'd realize it wasn't me writing and talking, it was her, and I needed to just let her tell the story.

I did not end up with an agent. I queried over a hundred of them. I had a fair amount of agents request partials and then fulls, and almost all of them gave me personalized rejections, most explaining they loved the writing but just didn't know who to submit to, or they just weren't taking on new literary fiction authors. It was tough.

7. How many rejections did you get before your story was accepted by NorLights Press?

Over a hundred. Ouch. The querying and waiting were like a festering sore. I finally decided it wasn't going to happen for me. I stopped sending out queries and when I received the rejection on the last request I had out, I figured the boat had sailed on this book. Less than a week later I got an email from a friend I'd met on Twitter whose publisher had seen my blurb on his blog and was intrigued. They wanted to see the book. The rest is history.

8. Did you have a platform established before you were published?

I've been blogging for about three years and developed a pretty good network of people through that, although I like to think of those people as friends rather than just contacts. I Tweet, I Facebook. I'm a diabetic myself and am involved in groups that fight for cures, and so that was a natural in with this book. I also belong to a couple online book groups, writers groups, and Christian groups.

9. What are you working on now?

I've just finished my latest novel tentatively titled PRODIGAL. It's the story of a runaway girl who comes home at the begging of her younger brother and ends up eyewitness to the murder of her parents, which leaves her as the sole caretaker of her brother in the town she'd tried so hard to escape. It takes place in the same town as Some Kind of Normal with some of the same peripheral characters, but it has a completely different feel to it. It's really the story of forgiveness and hope and defining what family means.

10. What advice do you have for aspiring novelists?

First of all, surround yourself with other writers who will encourage you and be positive, and yet be honest about your work... people you trust and like. Find them in your book club, or library, or online. The road to publication is bumpy and often discouraging. You need other people who are going through it with you and can help KEEP you from jumping off the ledge.

Read books in the genre you write, and read books about writing. And write. A lot. The only way to truly get better is to keep writing.

And take to heart that just because you've been rejected doesn't mean you don't write well or you don't have a good story. Rejection just means that book wasn't for that agent. Or the timing just isn't right. It's not personal. Keep sending out your work, and keep writing, because if not this one, maybe the next one.

Wow! Great interview! Thank you both for sharing. I'll add the book to my list.

Thanks, Holly! You always make me look great. :)

Thanks, Susan! And don't be silly Heidi, you look great all by yourself! ;o)

Hello Heidi. I just found you on Networked blogs and am your latest follower there and on GFC.
I am an aspiring writer and delighted to have found your great blog.I'm off to snoop around your site (if you don't mind me being nosey). Please drop by and maybe follow me if you fancy a laugh. I'd be delighted to welcome you.
Friendly wishes
Carol from www.facing50withhumour.blogspot.com – the blog that gives you laughter lines. (Has that put you off?)