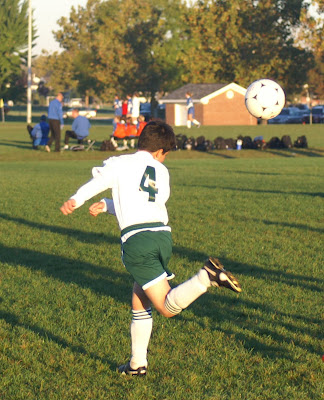 Allrighty, here is my final "looking back" post. I felt it was appropriate since my son sprained his ankle in his soccer game on Saturday. I'm sure he was most grateful that I happened to be away for the weekend. Enjoy!

I saw this really funny Mother’s Day card back in May. It had a picture of a 1950’s June Cleaver style mom, complete with pearl necklace—her arm around a pouting, incredibly sad-looking little boy. And the caption read something like: “You stay right here sweetie, while mommy goes and gives that mean old bully a smackdown.”

That totally cracked me up! Because, it’s so true. Any mom will tell you, mess with our kids and you’ll bring out our inner lioness.

And it’s not just confined to dealing with bullies. It makes no difference if they’re toddlers, or teens (who are bigger than we are), the instinct to protect our cubs arises in any situation where we feel our child is in peril.

The other day my 14-year-old son, Joshua’s, soccer team was playing in the pouring rain. While we parents stood on the sidelines, sinking into the mud, I suddenly noticed Joshua double over, then raise his hand in a request to come off the field.

He NEVER does that.

He sat down on the bench, remaining doubled over, his arms wrapped tightly around his ribs.

“Why is Joshua doing that? Did anybody see what happened?” I asked anxiously.

“Is it his ribs? Did someone hit him in the ribs?”

“I’m going over there,” I announced, and began marching around the field’s perimeter.

I was halted by another team member’s father.

“You have to wait and see if the coach waves you over.”

“That’s just how it works.”

“But the coach isn’t even looking at him! He’s watching the game!”

“Well that’s just stupid!” I fumed, sloshing back through the mud. “What if something is really wrong? What if one of his ribs is broken?” What if he needs emergency medical attention?

(Have I mentioned before that I tend to have a somewhat, er high-strung personality type? Anyway…)

I stood there waiting a few more minutes. Joshua remained doubled over.

“This is ridiculous,” I finally said. “That’s it. I’m going over there.”

“Don’t do it.” Another dad stood in my path.

“Why can’t I go over there?” I was whining now.

He proceeded to share a story with me, about how when he was 15, and playing baseball, a boy on his team got hit by the ball. The boy’s teammates helped him off the field and onto a bench in the dugout. The boy’s mother raced over and said (in front of everyone) “Are you okay, sweet pea! Let mama check out that bump?” Naturally, the kid was mortified. Probably scarred for life.

“But I would never call Joshua, ‘sweet pea’!” I huffed.

The dad just shook his head at me.

“Would you like ME to go over and check on him?” he finally offered, taking pity on me. (Or possibly hoping to escape my dramatic sighing.)

I turned hopeful eyes toward him. “Would you?!”

The nice man trudged around to the other side of the field. I saw him speak briefly to Joshua—STILL doubled over—then he trudged back.

“Well? Should I call an ambulance?”

For the remainder of the game, though, I wondered why it was okay for ANOTHER player’s dad to walk over there, but not the player’s mom. Weird ‘sweet pea’ mom story aside, who made up this unwritten rule that if a kid gets hurt on the field, it’s NOT okay for the mom to check on her very own child?

I posed that very question to my son later, as we drove home from the game.

My boy stopped toweling dry his hair, turned his beautiful dark eyes in my direction, and answered me. “Kids did, mom. Kids made up that rule.”

Ha! I had a similar experience except my kid was 10 and he was having an asthma attack (or so I thought) during a basketball game. I actually walked around the court to the benches to check on him. He said he was FINE! I'm not sure he's ever forgiven me.