You Say Puglia, I Say Apulia 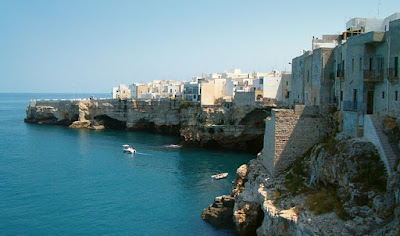 City of Polignano a Mare in southeastern Italy. I love
how it’s built up above the craggy limestone
to overlook the sea. (Image by: Idéfix)
My deepest apologies, dear readers, for not posting last week--and for my late posting this week. I was immersed in a super cool travel writing project with a tight deadline. When my project coincided with three weekend-long family commitments in a row, well…let’s just say I lost several workdays and was really sweatin’ it towards the end! But I’ve finished and was quite pleased with the results. Now, of course, all I feel like doing is lying around reading, watching movies and catching up on all the Dancing With the Stars episodes I missed!

My writing project involved investigating a specific region of southeastern Italy known as Puglia (a.k.a. Apulia), right on the glittering Adriatic Sea. For a little switch from my usual type of post, I thought I’d share three of the more interesting things I uncovered in my research.

The first thing I’d like to show you are Italy’s most unusual homes, known as trulli. They are found nowhere else in the world, and their origins remain a mystery, with theories linking them to ancient Greece, as well as their creation as 15th-century tax dodges due to the fact that each dwelling could be demolished and reconstructed within a matter of hours. 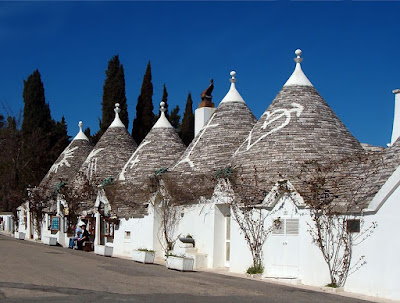 In the city of Matera, I found the sassi even more intriguing. 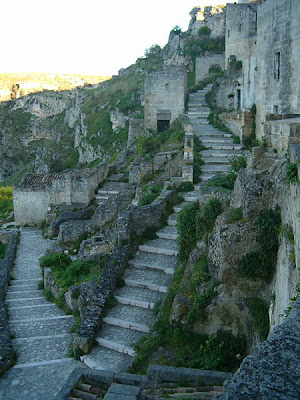 Matera is located in the easterly province of Basilicata. These rock-hewn dwellings known as sassi, were originally gouged out from the malleable tufa rock by troglodytic nomads. In later centuries, blocks were cut and used to add rooms and create elaborate façades for these cave homes. Each roof served as the foundation to the level above. The sassi contain more than 120 rock churches carved by monks between the 8th and 13th centuries (one church is still in use!) and they are decorated with beautiful frescoes. 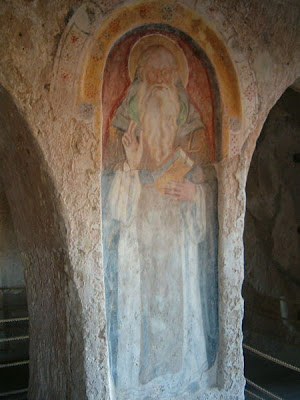 What I found most interesting is that the people of Matera lived in these dwellings until the 1950s! At this point, the population was rehoused by the Italian government. In the 1980s, however, people began returning and the sassi are in use today.

Another interesting fact: Because of the city’s resemblance to ancient Jerusalem, Mel Gibson chose this location to film his movie, The Passion of the Christ.


And last but not least--guess when this castle was built? 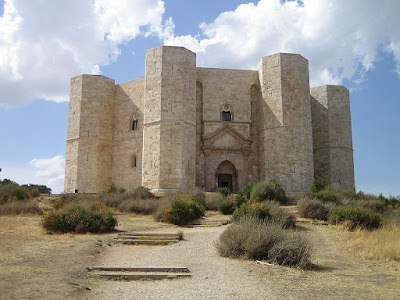 Did you guess the 13th century? I know! Bizarre, right? This is the Castel del Monte which was built between 1240 and 1250. It’s in the town of Andria and was commissioned by Holy Roman Emperor Fredrick II. (I could spend an entire blog post on just him, but don’t worry, I won’t!)

Frederick II had extensive intellectual interests and a love of mathematics, and this castle is a geometric study of the number eight. Currently pictured on the one-cent Italian coin, this octagonal bastion is considered one of the most sophisticated secular buildings of the medieval era. It was constructed from huge blocks of limestone loaded with quartz and is an exact octagon—a shape which symbolized the transitional stage between Earth and the heavens in medieval times. The castle is full of strange symmetries and pre-Christian astrological meaning. Each floor contains eight rooms of equal size, and eight austere towers overlook acres of beautiful olive groves and vineyards.

Thanks for travelling with me. I hope you enjoyed these highlights of southeastern Italy!

Wow!! What a cool, cool post...thanks, Holly! I've not been to Italy since '86, and I am quite certain I didn't see any of these sights. The sassi reminds me a bit of the country side at the Isle of Capri, but I could be suffering from middle-aged brain and hallucinating it. ;D

No worries about not posting last week for me...my sister was visiting and I pretty much ended up not blog-reading for 3 weeks.

I enjoyed that travelogue very much. I love Italy. I think the Sassi were just gorgeous. Would love to see them.

What a great post - we're hoping to run away to Italy for a couple of weeks later this year - I may have to add the Puglia region to my list of "must sees"!

I have always wanted to go to Italy! It's on my places I need to see before I die list.

Did you get to go to Italy for the project? Can we see it online anywhere?