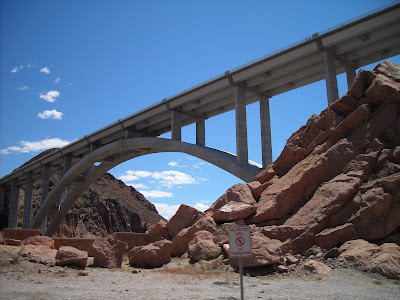 My hubby Chris and I journeyed to Las Vegas a few weekends ago for a family function. I’d never been there before and was curious to see what this place--known as everything from “Sin City” to a great family vacation destination—was actually like. We were only there for a weekend, and with all the family fun scheduled, we only had little time to see the city’s sights. But I think we managed to catch a few of the highlights.
When we arrived, we met my uncle for lunch. He’s lived there for 21 years and guided us to some beautiful views… 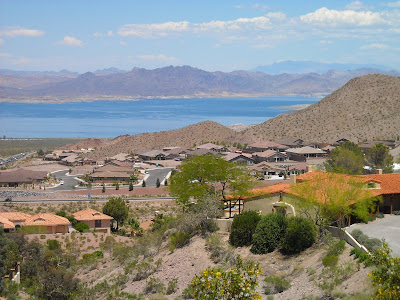 …including the Hoover Dam and bridge. 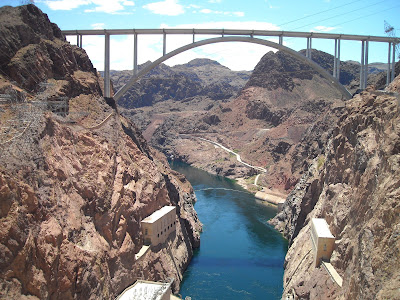 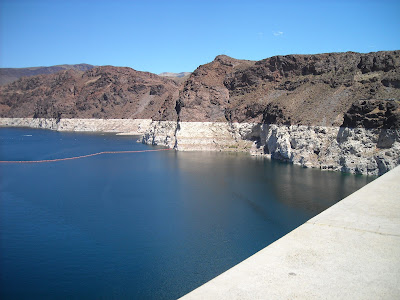 We witnessed the 30-foot tall bronze sculptures known as “Winged Figures of the Republic,” created by Norwegian-born, naturalized American Oskar J.W. Hansen. They guard the plaque commemorating the 96 men who died during the dam’s construction. 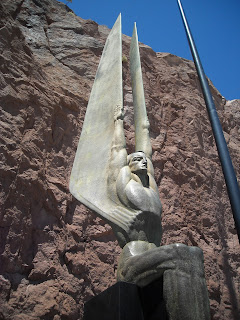 On our final night there, we booked a room at The Venetian, which I must say, was the most amazing hotel I’ve ever had the privilege of staying in! 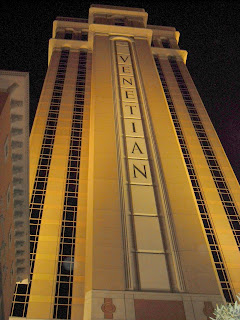 They even offered gondola rides! 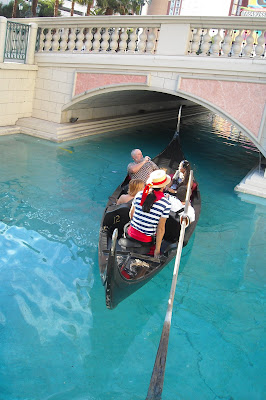 We traversed the Las Vegas Strip—that infamous 4-mile stretch of Las Vegas Boulevard. I was excited to see it, and at first, walking around was pretty cool. We saw loads of fascinating people and interesting things, like Pretend Paris… 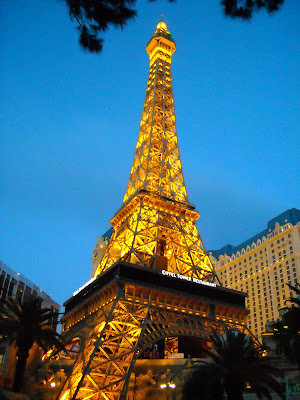 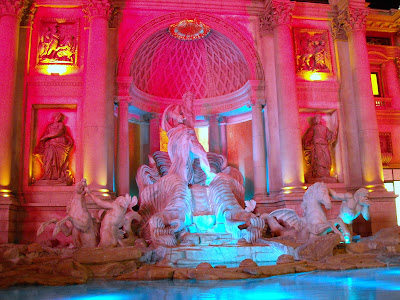 I’ve heard the lights of Vegas are so bright that to airplanes flying overhead, they emulate the effect of the rising sun. 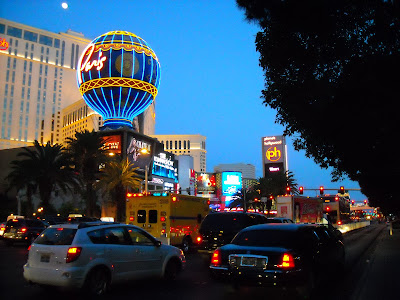 I wandered through some exclusive shops and came really close to buying an adorable little, white sundress for a mere $1,950. NOT!!! Seriously, who buys this stuff?!! 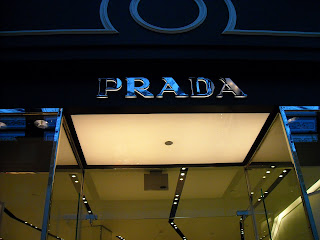 Now on the flip side, I must respectfully disagree with anybody who suggests that Las Vegas makes a nice family getaway. We witnessed some pretty sad stuff on The Strip, as well.
First, there were the hot little numbers wearing their super short, super tight little numbers, teetering along the sidewalk and clearly looking for…ahem, a little fun. Chris and I observed many of them the following morning, just returning to the hotel as we were leaving at around 6:00 a.m.
Then there were the “Card Flicker Dudes” (CFD’s), at least that’s what I’m calling them. These were men and women whose only job appeared to be to stuff naked women’s er, business cards into the hands of passersby. 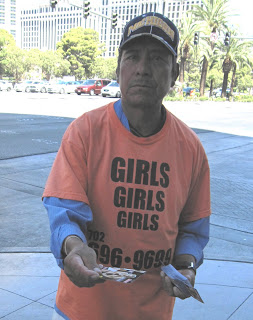 Image from Jimmy Hoofa’s Las Vegas Blog
One of these CFD’s tried to hand a card to my brother-in-law as he was walking beside his 16-year-old daughter, and I actually had a female CF reach across me in an attempt to hand a card to Chris. Don’t worry I used my karate chopping techniques and she backed off instantly. 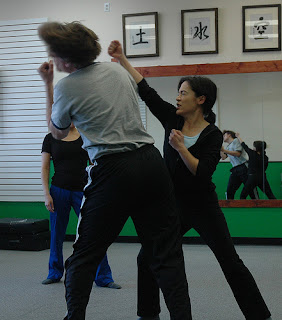 Image by Memekiller
Neither Chris nor I are gamblers. And I know many people find gambling a fun form of entertainment, but I must confess I don’t get it.
It was a beautiful, warm sunny day, and as we took a shortcut through one casino I found it a little sad to see all the people spending their day propped up on stools in front of machines, eyes glazed and faces reflecting the neon-colored glow of the flashing game screens in front of them.
But you know I like a happy ending, so to finish off this post, I’ll share that some of my favorite movies are the Ocean’s trilogy. (If you haven’t seen them, rent them!) So I was especially excited to see the Bellagio in real life, as well as its beautiful musical fountain—the one that’s depicted at the end of “Ocean’s Eleven.” 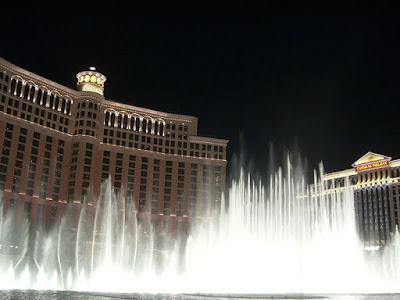 Image by Poco a poco
Here’s a short excerpt from the one I watched. They performed My Heart Will Go On by Celine Dion:
Just beautiful!
Posted by Name: Holly Bowne

It's been a long time since I've been in Vegas. I was 18 when I went to Vegas, and I've always wanted to go there with my husband.

I agree that there is so much more to Vegas than gambling! You took some gorgeous pictures! I'd love to have a week or so to hunt around the outskirts of town with a camera! Such different landscape than where I live!

But there is a lot of sad goings on, too. So many really lost people there. I think I might have karate chopped the CF too!!

I was nodding to everything you wrote! We were there a couple of years ago (hubby had a conference) and were rather appalled at just how seedy it is. I'd been there before a couple of times (once just passing through, once with my folks) and it was never impressive any of those times.

When we went with the kids 2 yrs ago, we did the Hoover Dam too...what an amazing structure and history!

Your pictures are beatiful. I don't think I'd like to go. The bad parts of your story seem like a real downer. Still, you made use of an unusual situation. Good for you.

What a great travelogue - thank you!