5 Advantages of Being a Cougar 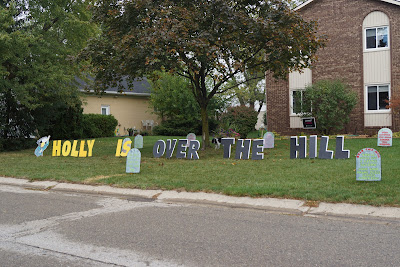 Well, as my front lawn clearly BROADCASTS (thanks to my darling hubby!) I’m celebrating my 50th birthday today! Some people feel weird about birthdays, especially milestones, but I love my birthday! The only one I truly recall having anxiety over was when I turned 18. I freaked out because I knew the world now considered me an adult but I felt like I didn’t know anything!

Now I know I don’t know anything, but I realize nobody else does either. Plus, I think I’m gonna sound way cool saying things like, “Yes, well, speaking from half a century of experience here…” and “Scuze me? Listen honey, I’ve been around for half a century, so I’m pretty sure I know a bit more about....” Stuff like that.

In addition to becoming half a century today, you may be surprised to know I’m also a…cougar. That’s right. I’m older than my husband. Now some people might not think that’s something to brag about either. But there are some definite advantages to being older than your husband. These are probably some of the very things Demi Moore thought about when she first married Ashton Kutcher.

Five Advantages of Being a Cougar

1. Your Status: There’s the obvious status boost you attain among your peers as a renowned cougar. A woman able to capture the love of a younger man. Added bonus: Arm candy! He looks fabulous on my arm at a party!

2. His Status: On the flip side, your man gets to brag about he’s ignited the love and passion of an older woman. Oooh, la, la!

4. Arguments: If you figure out you’re losing an argument, you can always fall back on the line, “Honey, thanks for sharing your thoughts. But, let’s face it. I’ve got much more life experience than you have. So let’s just defer to me on this little matter, hm?”

And my personal favorite…

5. Driving: You know those rare occasions when you’re actually the one driving and your hubby is in the passenger seat? And he’s providing you with all sorts of unnecessary and unwanted driving advice? At those times I just turn to him and say, “Sweetheart, you just sit there and look good. I've been driving A LOT longer than you have, so I’ll take it from here.”

Postscript: Chris yelling from the background, “Knock it off! You’re ONLY 17 months older than I am!”

Hilarious post! I'll about 11 months older than my hubby and sometimes try to call rank on him in the same way. LOL.

I did not know I had this cougar thing going for me! I am six months older than my husband, but he likes to make it sound like an epic amount of time (that person was born in "your year", he says... like it's a century off from his). Now I have to exploit that big time!! Happy 50th, Holly!

And I can totally relate, Anonymous. My hubby is always telling people that I "robbed the cradle." Ha, ha!

I didn't realize that I was a cougar. Now that's status. I love your arguments. Hope your birthday was great.

Thanks so much, Nancy! It's sort of ironic, but several of my good friends are cougar, too! (Although genuine cougars may argue we're not really legit! Ha, ha!)

You are a riot! Happy belated 50th birthday!!

My hubby turned 50 last month, but I have 2 more yrs to go to being a half century. Still, we got our AARP cards..woohoo...looking forward to the discounts. ;)

Hey! I didn't get my AARP card yet! I could definitely use some discounts. ;o)