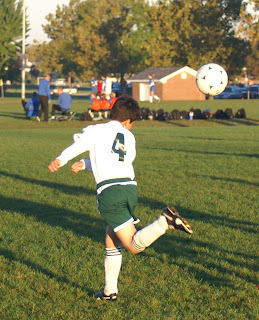 We spent last weekend with my brother-in-law’s family. We joined them to watch our niece play in a couple of soccer games and it occurred to me that I’ve officially hit the 10-year mark. I’ve been watching my own kids play soccer for a decade now. But that doesn’t make me a “real” soccer mom, does it?

When my children first started playing, it was really all about the social-ness of the event. I had no idea what was happening out on the field as I chatted away amiably with the other parents. “What? Somebody scored?”

As the years and their skill levels progressed I started paying more attention, still never thinking of myself as a true soccer mom. I’m just a mom, who has kids that play soccer. To my mind there is a definite distinction. Soccer moms are much more soccer-obsessive than me, right?

But what defines “soccer obsessive”?

Does running my kids around to multiple soccer tryouts during the third week of June count?

How about standing on the sidelines and cheering loudly in the rain, sleet, snow, wind, and burning sun in multiple cities and states while they play?

Does being clueless about the rules, but thinking I clearly understand them make me a bona fide soccer mom? Like when I yell, “No pushing!” should another player lay a hand on my kid. “They’re allowed to do that,” my husband whispers before moving quickly away from me, probably concerned about guilt by association.

And I thought I was just being encouraging when a goal is scored and I allow my inner cheerleader to burst forth--jumping from my seat, hands in the air, “Yeah!” (“Knock it off with the spirit fingers, mom!”)

When I’m gripped with the urge to march up to a particularly “foul” player and ask if his or her mother is aware of their language and conduct because I would be ashamed if it were my child, I resist. Doesn’t that show good nonsoccer mom-ish self control?

No, not really (sigh). I must acknowledge the truth. I’m a soccer mom, aren’t I.

Well…now I’m starting a new chapter in my life as a soccer mom. My son has completed the soccer referee certification course. He’s so excited to start refereeing games. I’m a bit more apprehensive. What about the stuff we’ve read about how some of the more psycho soccer parents behave towards the refs? I’m a little worried.

There’s no help for it. I’m just going to have to sneak and attend these games incognito. I’ll have to blend in with the parents of whatever sideline he’s working on and say things like:

I’ll attempt to calm overactive soccer parents with “Let’s keep it professional and be nice to the refs, please.”

And encourage the positive parents, “Gee, that ref is doing a great job, isn’t he. Maybe you should write a letter of appreciation to his boss. Would you look at that! I happen to have the address right here.”

But in order to not give myself away, I’ll have to work really hard on controlling my spirit fingers when he blows his whistle, snaps his flag especially well, or gives out his first yellow card.

Maybe I’m worrying over nothing. I mean, he probably won’t see a lot of action in the Pee Wee division he’s assigned to. On the other hand, you never know what might happen with those soccer moms.
Posted by Name: Holly Bowne