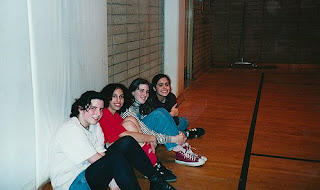 When I was a kid, picking sports teams in gym class consisted of the really athletic kids being automatically selected as captains by the gym teacher. They’d move up to the front of the room and divide the wheat from the chaff as the rest of us sat on the scuffed-up gymnasium floor.

Anybody from that era remember the small, scrawny kid sitting off to the side? Always the last one chosen, usually by default because nobody else was left. Yeah. That was me.

I hated most sports and I was terrified of the ball. Every ball. The only sport I was decent at was dodgeball due to my horrific fear of being hit by a ball thrown by one of those missile-launching boys. I ducked, hopped, dove and rolled out of the way. Of course, I couldn’t throw the dumb thing, but I could get out of the way real quick when I had to.

Throughout my youth, I completely lacked confidence in my athletic abilities. It wasn’t until I reached 44 years of age and took an eight-week soccer class with some other soccer moms that I scored the first goal of my life.

My 14-year-old son happens to be one of those “athletic” kids. He enjoys participating in a variety of sports, soccer being his favorite. He was recently describing his gym class to me. And I was amazed at how much it has changed since I was a kid.

His gym teacher started a new unit on soccer. He asked for a show of hands to find out who already knew how to play the game. He then pulled my son, and a few of the other soccer-knowledgeable students aside. He explained they would be the coaches for this unit. Their jobs were to instruct and encourage. The coaches were each assigned a group of randomly selected students, and for the first day they worked with their group, teaching them the basic skills necessary to play soccer.

The next day, the coaches met and divided the students amongst themselves. The coaches with the most experience selected more of the struggling players to be on their teams. It was the coaches’ job to create balanced teams, so that no team was stacked in terms of talent. The players for each team were announced in no particular order. Then the games began.

My son explained that if at any time one team started getting too far ahead in scoring, as coaches they would switch players around to create more evenly matched play--the ultimate goal being to have great games. He animatedly described how he worked with his team and how impressed he had been in their first game as they passed the ball, worked together, and successfully scored. Some of the children who normally shied away from athletics, enjoyed being part of a team and were thrilled to score some goals.

How cool is that?

In effect, that gym teacher took the kids like me, and boosted their confidence a hundredfold. Maybe the kid like me is now thinking, “Wow, that was fun!” Or maybe it simply planted a seed and they’ll consider pursuing a different sport down the road somewhere. Who knows what good will ultimately come from this. Instead of learning to play favorites, loading a team up with their buddies and the athletically gifted, these students learned compassion, good leadership skills, and that the goal of a good coach is to teach and support, building up the abilities of their players.

At the very least, it’s nice to know there are some middle schoolers out there who won’t have to wait until they are 44 years old to score their first goal.

I hated gym class too.. we had dorky blue uniforms we had to wear during gym.

I did get here from refreshing the page, but from the link on twitter I got an error.

You didn't even mention those mandatory communal showers. Now as an adult I'm able to be nude in the women's locker room without embarrassment, but in junior high and high school having to shower buck naked with 24 other girls was a little awkward at the time.

Ugh! I totally forgot about showering. I think I blocked that memory completely!