Take That, You Low-life Virus! 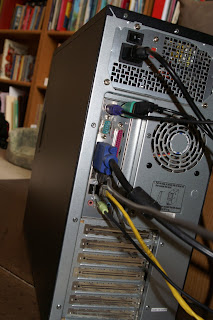 It’s been a rough week and a half. It’s not only cold and flu season for my family, but for our computers as well. Over the past ten days, both of our computers have been attacked by viruses a total of three times.

First, my work computer went down for the count. The virus was sneaky and since I’d never experienced one before, I had no idea what I was dealing with. I called the computer shop where I’d purchased it, and before I could even complete a sentence describing what was happening, the owner of the shop interrupted me. (He’s from down south, so picture the following in a southern drawl.)

“Ma’am, I’m sorry to interrupt you, ma’am, but I need to stop you right there. Your computer is being attacked by a virus right now, here’s what I need you to do…”

As I hyperventilated, he walked me through the steps, but unfortunately, it was too late. The virus had infiltrated my system too far. I had to take it in to be “cleaned.”

Two days later, I had it back and I was singing with joy…for about 24 hours. Then it was attacked again! I tried to eliminate the stupid virus, but to no avail. The virus’ evil tactics prevailed and it won again. Unbelievably, I had to take it back to the shop.

I picked it up yesterday afternoon. Once again, singing with joy to have my old friend back and healthy. I had just arrived home from the repair shop, and set it on the floor of our home office. I hadn’t even plugged it in yet. I was talking to my daughter while my son researched information for an upcoming school project on our back-up computer. Suddenly I heard his quiet voice, “Mom, our computer is being attacked by a virus right now.”

I’d like to say I set a wonderful example for my children. I’d like to say I took it all in stride, focusing on the fact that we at least had my computer back before the virus struck the only other working computer with Internet connection in the house.

I sat down on the floor and threw a very loud tantrum. I cried and cried, shoving my two children away as they tried to comfort me. (I apologized later.) When I was done, I wiped my eyes. Blew my nose. Said a prayer. And then got really, really angry. No way was this slimeball virus gonna beat me again, blast it!

I prepared for battle.

From my last two forays dealing with this virus, I had learned a few things. I geared up my arsenal and quickly created a battle plan. I clicked on the screen and the virus attacked. I counterattacked, trying to close the trick messages warning me that I had multiple viruses and needed to upgrade and purchase some scam software.

The virus attacked again. This time I merely side-stepped the jab, dragging the warning message aside and opening the new anti-spyware I’d installed. I quickly ordered my army to run a scan. The evil contaminated message hung there. Open. Waiting.

The scan completed, and I immediately rebooted. Several messages flashed before my eyes. I could barely read them as the screen flickered and jumped. “Multiple viruses,” “Program not responding,” Program Ending,” “End Now.”

The screen went black. The computer lay dormant for a second. Was it dead? I waited and held my breath. Then I heard it. The sound of the computer coming alive again. But the game was not over yet. I did not go online, but in an aggressive defensive move, I instantly ran a scan of my anti-virus software. (Yes, the machine was attacked by the virus even though I have really good anti-spyware and anti-virus software!) I rebooted again. I then ran an update and scan of both softwares again, just to be extra sure. The end result?

After three hours of battle…YES! I’d kicked its BUTT!

Having dealt with this three times in such a short period of time, I’m not going to be overconfident and say I’ve completely defeated it. But my son was able to finish his research without one single peep from the virus.

Maybe the economy is in the toilet. Maybe my hubby could lose his job. But today, I am the victor! And I’m going to savor that thought.
Posted by Name: Holly Bowne

Holly, I enjoyed your entertaining rendition of your all-out virus war. I had a similar experience a few weeks ago with the Seneka virus (google it). It was the most pervasive and persistent bugger I've ever seen. If you cleaned it, it would reproduce itself and then hide itself so you couldn't find it. But you knew it was there because the computer would be doing very weird things when it wasn't supposed to. It I ever get it again, I'll know who to call -- Holly with VirusBusters!

Don't you love your new identity? Holly of Virus Busters. Bruce-Dad and I are proud of you. What a gal. Hope the grandkids feel better too.

Holly, you such an inspiration to the rest of us that fear computer viruses and any computer malfunction. Your tenacity to repeatedly get back up and swing again (think of Rocky) is awesome. I think what is so frustrating about the computer viruses is that the average person is at the mercy of whoever they pay to fix them. There is very little we can do other than be really really nice to the tech support and hold our breathe and pray for the best. I think the true value of this experience is that it is really a metaphor for life in general...many problems come at us without warning and without our knowing how to fix them, but after our repeated attempts to face the 'viruses', we become stronger and more empowered the next one. May the force be with you...always!

You kicked butt!!!! Well done you. I'm sure I would have been a shivering wreck on the floor instead of stepping up to the plate and fighting back. Congratulations!

I went through a period like that, and believe or not it was in the middle of NANO and I lost my entire work.. The shop retrieve most of it.. and I went on to finish..

BTW I have f-secure and I love it.. What are you using for for your anti virus?

I use AVG for anti-virus AND now I also use SUPERantispyware as well. I update and scan with both daily. Gotta take those computer vitamins to keep well!