"But I Have Plans!" She Wailed 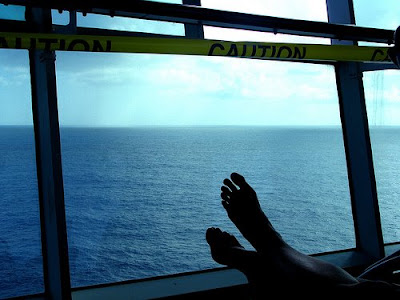 Guess what I did yesterday. Sat on my butt the entire day. Reading.

As much as I love reading, and sitting on my butt, I did not do this by choice.

I’m pretty sure the majority of moms out there can relate to what I’m about to say. (Except the really cool, balanced ones--and if you’re out there, please contact me immediately, I want all your secrets!)

Most moms aren’t very good at just sitting and doing nothing. Most of the time we’re multi-tasking. We’re folding laundry while we talk on the phone. We’re cooking dinner while quizzing our kid for an upcoming test. We’re sitting in the same room with everybody but we’re going through the mail, paying bills, filling out permission slips, signing school progress reports. Moms in general don’t get the whole, put-your-feet-up-and-take-a-break deal.

And for me personally, since I began freelance writing more steadily, I’ve gotten worse. I sort of realized I was becoming a bit of a work-a-holic, but shoved the thought into a dark corner of my mind where I felt it belonged. I didn’t want to sacrifice family time, friend time, or workout time, but without doing it intentionally, I instead sacrificed me time.

Whenever I pray for God to give me guidance about stuff, I typically add the caveat “…and God, puh-leeeze bonk me over the head with whatever you’re trying to tell me. You know how bad I am with the whole ‘still-quiet-voice’ thing.”

Well, a while back I was barreling along at top speed, when I developed a foot problem. Even though I knew it would help immensely if I stayed off my feet a bit more to let it heal completely, did I do it? No.

Then, I damaged my biceps muscle shoveling landscape rocks this past summer. Did I stop lifting things, allow others to help me, and just let it heal. Nope. Ended up overdoing it and having months of physical therapy instead. Like the Energizer Bunny I keep going and going. Pushing my body to keep up with my plans.

This reminds me of that scene in the movie Evan Almighty, where Evan is saying to God "…you have to understand this building an ark thing really isn't part of my plans here...” And Morgan Freeman, playing God, just bursts out laughing. “You have PLANS!! Baaahh, ha, ha, ha, ha!!!”

Well, since I obviously hadn’t gotten the message the first two times, this past weekend, I got bonked. But good.

I have absolutely no idea how it happened, but all of a sudden my right knee is giving me incredibly sharp, shooting pain whenever I try to bend/unbend it too far. My hubby, who has had three knee surgeries, wrapped it up like a burrito and had me sit with it elevated on an elaborate array of pillows yesterday. All day. From the time I got up, until the time I went to bed. I sat.

I read one of the Twilight series books I’ve been dying to read. Every so often I’d feel twinges of guilt, thinking I really should do a bit of work on the writing projects I have due this week. Or I’d pause to moan about what an inconvenient time this has occurred. (Like there’s a convenient time to damage your knee.)

Then I’d sigh, settle myself more comfortably against the pillows, squelch those feelings, and read some more. It’s not like there was anything I could do about it anyway. Unless God sent a miracle healing my way.

But maybe that’s exactly what He did. He probably said to Himself, “Okay, this chick really isn’t getting it. She wasn’t kidding about needing to be bonked over the head.” Boom. A forced R & R day. And you know what? It was so relaxing. I’m pretty sure the last time I spent that much time sitting on my butt reading a book was when I was in middle school.

But after my day of rest, I’m actually feeling creatively recharged. I’m ready to work. So people (especially you multi-tasking moms out there), I’m telling you now: take breaks. We’re supposed to. Don’t wait to get bonked over the…knee.

Amen! Take the day of rest God given to you! It is a beautiful gift, and a warm one at that! Also, if there are any folks out there working and getting no sufficient amount of developmental sleep at night, remember: "He gives His beloved sleep!" Peace be unto you all!

Yes! Excellent post! I had something of a rest day yesterday, too - my daughter has been sick, so I hung out on the sofa with her and read and watched TV. Really nice.

Hope your knee gets better and surgery is not required!

Oh i love days like this! Now, take care of that knee - that's important - and rem. to stop and relax from time to time - equally important but so much harder to do!

Time out really is priceless and so good for the soul! I indulged ALOT in that sort of kick back and read position and I'm still weaning myself off it (says she who borrowed three books today!)