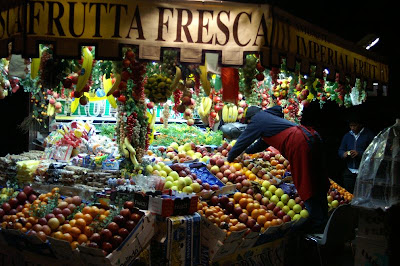 For our last full day of touring in Rome we decided to appease our 14-year-old son, and headed out to tour some catacombs. We chose the Catacombs of San Sebastiano. These were a bit further away, but were supposed to be less crowded.

There are around 40 catacombs scattered outside the ancient walls of Rome. The catacombs are burial places, primarily for Christians since they preferred to be buried as opposed to cremated. By law, nobody was allowed to be buried within the walls of Rome. Land was expensive and many Christians were poor; so to make the most of the space available, the catacombs were dug into the ground and contained multiple levels. The Catacombs of San Sebastiano have four different levels. 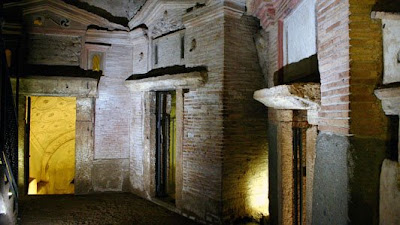 It was quite amazing how elaborate the underground construction was. We saw empty grave after empty grave dug into the walls of the catacombs, but no bodies remained. 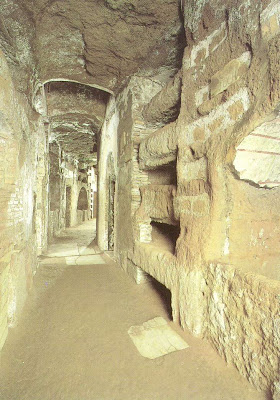 “I’m sorry we didn’t see any actual skeletons, buddy.” I apologized to Joshua after the tour. “I was sure there’d be skeletons.”

“That’s okay, mom,” he replied in characteristic easy-going style. “It was still cool.”

Using the bridge known as the Ponte Sant’Angelo, we crossed over the Tiber River that runs through the city. In the middle ages, this was the only bridge that connected the Vatican and St. Peter’s with downtown Rome. 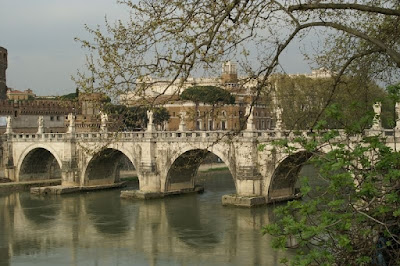 And the angel statues on it are Bernini designed. 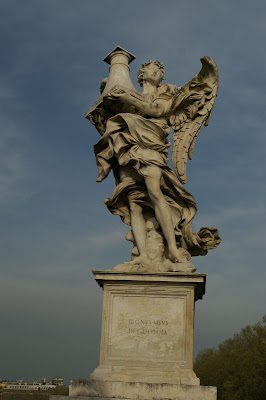 From the bridge we viewed the exterior of Emperor Hadrian’s tomb, the Castel Sant’Angelo. (Because even an emperor’s tomb couldn’t be inside the city.) Originally built in 139 A.D., the tomb has been used over the years as a castle, prison, and papal refuge. 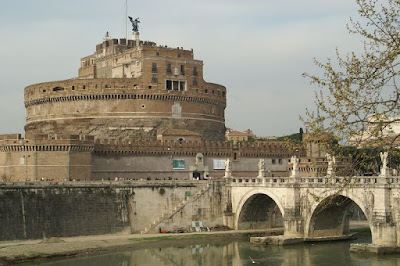 We hadn’t yet experienced the infamous shopping mecca of Rome, Via del Corso, so we headed there next. This street is lined with super expensive, designer shops. 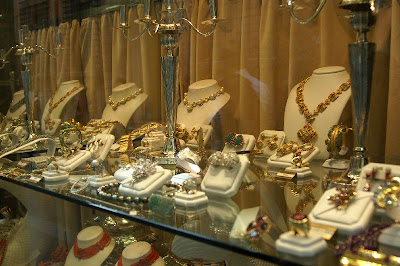 But even more interesting than the stores were the people. Because it was so close to Easter, the street had a distinctive carnival-like atmosphere. It was jam-packed with people. Toy hawkers attracted customers by blowing bubbles at them, clowns made balloon animals, and creative types looked to make a buck from the multitudes combing the streets with Euros to spend.

We came across these street dancers hoping for donations, and Joshua took a short video of them. 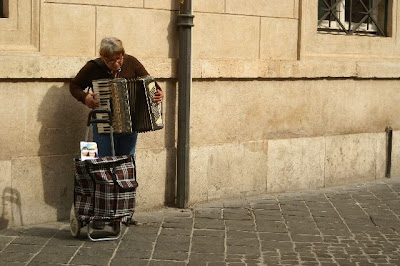 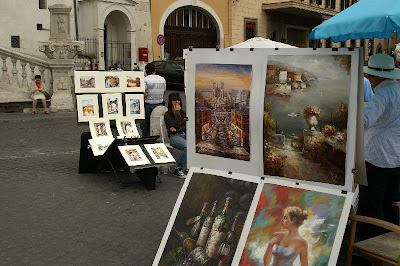 We also saw lots of this, too. 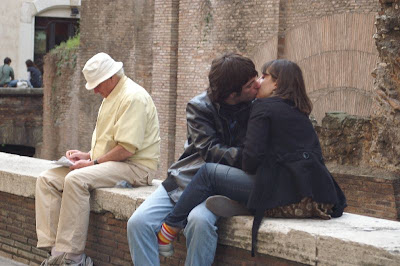 I enjoyed mortifying my teens by snapping pics whenever possible. “I want to capture the true flavor of Rome,” I explained as I snapped a few more. Joshua just shook his head and moved quickly away from me. “Don’t they have homes?” Ashleigh wondered.

While Josh and Chris were browsing in a boy-oriented store, Ashleigh and I waited for them outside the shop. We noticed that Twilight is just as popular in Rome as it is at home. 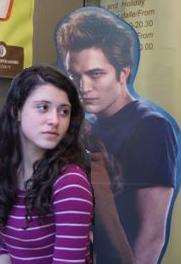 Saturday evening came to an end, and on Easter Sunday it was time for us to say farewell to Rome. But our adventure wasn’t quite over yet…

We arrived at the airport around 4:30 a.m., and wheeled our luggage around until we finally figured out where we were supposed to be. Chris travels so much he has one of those special frequent flyer cards, so we skipped past the long line of “regular” people, sailed through baggage check-in, and the security check. An airport employee directed us to our terminal with an “Arriva Derci” and a smile. We had just started walking when, BAM! All the power in the building went out.

I’m not making this up! At the same time, an incredibly loud siren started wailing in our ears. We stood there, for the second time that week, blinking in total darkness.

Using Joshua’s pocket flashlight, we made it to one of the terminals and sat down in some empty seats while Chris strolled to the massive windows and peered out into the blackness. “Yup,” he called over the siren. “It’s just our terminal. They’ll probably end up evacuating the airport.”

It took all my willpower not to throw myself on the ground and start screaming above that blasted siren, “NOOOOOO!!! I want to go home!”

The weird thing was, nobody appeared to be panicking. Actually, considering our apartment neighbors’ earthquake response, it probably wasn’t all that weird. Security guards strolled casually past--occasionally answering questions in Italian, which we of course couldn’t understand.

We sat in the dark for almost an hour before the power came back on and the siren quieted. Everybody in the terminal cheered.

Slowly everything came back to life. They never did evacuate the building; and we finally boarded the plane a mere two hours late. Thus, our two-hour layover in Amsterdam consisted of 65 people racing through the airport, hauling our carry-on bags, as we attempted to make our flight home.

So ended our European Vacation: Adventure in Rome. Farewell ancient ruins. Farewell gelato. Ciao Roma! All-in-all it was quite a fascinating trip. Hope you all enjoyed it as well!

Joshua:“I don’t want to see any more naked people!”
Ashleigh: “Yeah, I’m kind of sick of naked people too.”
Holly: “I hope the next museum we visit has an audiotour.”
Chris: “Do you think we took enough pictures…”

So, the lights seem to go out an awful lot where ever you go. Are you sure that you aren't carrying some sort of EM pulse device?

Good read, I enjoyed it.

Ahhh, farewell Roma. What a great trip you had (even if you have the ability to turn off the lights whereever you are!) and I'm quite envious!!! Super thank you for taking the picture of the jewellery store - I'm sure that just for me! :D
Ciao bella!

But of course the jewelry pics were just for you, Annette! (I need to learn to spell jewelry the Australian way,"jewellery." ;)

And for anyone reading this blog, hoping to purchase some beautiful, more affordable jewellery, please visit Annette's site: http://www.annettepiperjewellery.blogspot.com/