Is This the Face of a Killer? 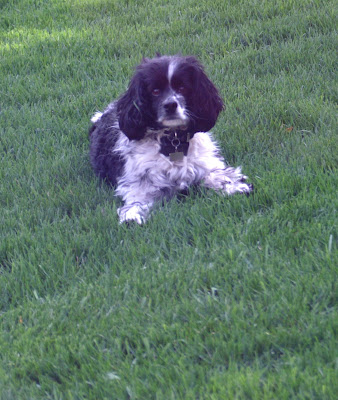 Last spring I was quite traumatized when my cuddly, little cockapoo became—well, there’s really no other way to say it--a murderer. He killed some bunnies living underneath our deck. It was AWFUL!

Oreo is normally a great listener (better than most teenagers) and responds instantly when I call him. Except then. He reverted back to his wolf instincts, or whatever, and refused to come. He was a dog on a hunting mission and nothing was going to deter him.

We’ve rebuilt our deck since then, and he can no longer fit underneath it. But apparently the bunnies can. Several weeks ago they built another nest under there. I had to keep Oreo on a leash for two weeks straight so he wouldn’t dig holes all around our deck in his attempts to get at them. It was quite frustrating. I wondered how long the life cycle of a baby bunny was and when they would finally move on. But eventually they did, and Oreo enjoyed free reign of the backyard once again.

Then two days ago, I noticed a bunny digging a hole in the middle of our yard. When I went out to chase it away, it just looked at me and laughed. (I hate it when wild life isn’t afraid of me!)

I pulled myself up to my full five feet in height and roared at it. It performed a couple of bunny hops and stopped. I roared again, running at it, and flailing my arms--much to my teen daughter’s hysterical amusement. The bunny hopped just across the border of our property into our neighbor’s yard. I filled in the hole it had dug, and marched back inside.

The minute my back was turned the bunny was back.

In desperation, I let Oreo out, hoping his menacing 15-lb. presence would terrify the bunny enough to find a new home. He sniffed around, keeping the critter at bay.

But the minute his back was turned, the bunny was back. Digging.

I chased it away again, then got our big, orange snow shovel. I filled in the bunny hole again, and laid the shovel on top of it. Ha! Let’s see it try to move THAT, I thought.

But the following morning…yeah. The bunny was back. No, it didn’t move the shovel. This time it was digging next to the shovel. I filled it in and covered both holes with the shovel. The bunny just moved to a new spot in the yard and started digging.

Here’s something I don’t get. There are no protective bushes where this bunny is choosing to create its nest. There’s no shade. We have a dog. And we mow the lawn regularly.

Our next-door-neighbor’s house is currently empty. They have no dog. And they have lots of trees and bushes. For cryin’ out loud, where would you pick to build your nest? I think I’ve just figured out where the expression “dumb bunny” came from.

Anyway, now frustrated beyond reason, I eyed my husband’s BB gun, propped up in the corner of our kitchen…

Naw, I couldn’t do it! Not only did I have no idea how to shoot the thing, but what if I actually killed the bunny? Could I really handle that? Plus, I could put my eye out, right? But my husband wasn’t returning from a work-related trip for several days. What to do?

Well, I’m sorry to say I’ve become about as cold-blooded as Oreo. I’ve seriously reached my breaking point. I’m just going to let the dog continually patrol the property--let nature take its course. If the bunny’s number is up. It’s up. I know that may sound cruel but this is basic nature, “Survival of the Fittest,” “Circle of Life,” and all that.

If you remember some of the stories I've related to you about my childhood in the country during WWII, you will remember what we did with bunnies! We are them! As a child I enjoyed fried bunnies, stewed bunnies and bunny soup. Your grandmother used to save the bunny skins to decorate suits and sweaters! My little cocker spaniel doggy was great at flushing bunnies so that your grandfather could shoot them with his shot gun. That's the proper way to handle the bunny population when they overdo it!

I would love to see a video of you roaring at the bunny!

Love it! You're a hoot, Holly.