How Can I Be the Parent of a Legal Adult? 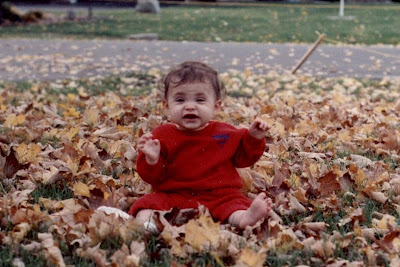 Well, it's January 7th and as those who celebrated Epiphany yesterday can attest, the Christmas season is officially over. Sigh.

I cannot believe our baby girl turned 18 years old over the Christmas holiday. Actually on Christmas. If you haven't heard me mention this before, yes, our oldest daughter was born on Christmas Day.

Of course, she was born nine, long days past her due date. And I kept hoping and praying she would arrive on any day but Christmas. But seriously, what was I thinking? With my name being Holly and my hubby's being Chris, on what other day could she have possibly arrived? (Ha, ha! Good one, God!)

But now, 18 years later, she is a legal adult. Freaky!

For the past 13 days, whenever we ask her to do something, she'll often give an impish grin and respond, "I don't have to do that, I'm 18." Very funny. I know she's only teasing, but still. She is a legal adult. How can I have a child old enough to be a legal adult? I'm barely an adult myself!

When my kids were little, I clearly recall people approaching me, strangers who were parents of older children. The strangers would smile at my little angels who were tormenting me during shopping excursions, or throwing tantrums because I'd pushed our errand-running jaunt a little too long. The strangers would always say something like "enjoy them while they're young like this, time goes by so quickly."

Of course, once the stranger had walked away, I'd roll my eyes and shake my head. Quickly? Were they kidding? It felt like it had taken five whole years for my oldest to reach five years old. Einstein said time is relative and I swear it moved a lot slower back then. But somehow it began to speed up, little by little, without me noticing.

Now, instead of late night feedings, I'm keeping my baby girl company while she does late night physics homework. She's applying to colleges and trying to decide what career path she's going to take. What she's going to do with her life. She's not my baby anymore. She's 18.

Over the holidays, we spent some time watching family movies of the kids when they were little.

"You were sooooo CUTE!" I'd coo, tweaking my 15-year-old son's cheek (much to his dismay).

"Yeah, what happened?" hubs would say, and then laugh heartily at his own joke.

But they were so cute. Of course, they're still cute, but when I think back it seems like it wasn't so very long ago that they were these tiny people chirping at each other in little chipmunk-sounding voices--giggling while they played.

Yesterday, I heard them giggling together like the old days. This was because the 18-year-old had deigned to sit down and play an old beloved X-Box game, Monkeyball, with her baby bro. They were giggling hysterically and to hear them made me feel bittersweet. It's at moments like that when I do miss the old days…

But in all honesty, I love the new days as well. Every stage they've entered has brought some amazing bonuses along with it (some negatives too, but let's focus on the bonuses, shall we.) Now, I'm the mom of two teenagers and one of them is an adult. Wow. I guess all I can do is savor those memories of the past, take a deep breath and throw my arms wide in anticipation. Ready to embrace the future: life as the parent of an adult.

…Eventually two adults, but let's not rush things. We'll cross that bridge when we come to it.

That is so sweet. But...she IS still your baby! Just a legal baby! :) Good luck to you and her as you navigate the days ahead. May you both write about them!

Time did go by much slower when they were little didn't it? I'm like you, though, I've enjoyed every stage of their lives. I hope I have the same attitude as you when my oldest reaches adulthood. Two years and counting. :(

Thanks, Kristine! And you're right. Even when I'm eighty and she's sixty, she'll still be my baby.

I have three legal adult children...how DID that happen?

You're right, the early years dragged on and on and then one day warp speed ahead.

It is an amazingly weird time, isn't it? My oldest is 18 and a freshman in college, and I find it totally interesting to be the parent of a legal adult especially when I have three younger kids at home. Waaaay younger! 6, almost 5 and 2 1/2.

Hi Holly, my name is Harry a happily married father of two teenagers living in Cyprus. Our daughter recently turned 18 and i sympathise with all you say. The creeping realisation that soon she will go to the UK to study at university fills me with dread.The whole family dynamic will be forever altered. This Christmas was indeed filled with joy but alas in the back of my mind i knew that this would be the last of it's kind. As the saying goes: "you can't stop progress."
p.s I've written a novel, part of which i have copied to my blog at www.writeronanisland.blogspot.com
please comment.Thanks, Harry
p.s the years are flying by!

So sweet, but no matter how "big" she gets, she'll still be your little bambina!

I'm the parent of a legal adult; a 19-year-old who constantly complains that she hasn't gotten to be a full fledged adult because she doesn't live on her own yet. She goes to college locally and lives at home (and that suits me just fine). I'm following you now and I'd love it if you followed me.

thank you for the reminder to take time to enjoy even the tantrums which will eventually be gone. It's hard to imagine it while my daughter is little but I will miss this age terribly when she's grown and gone!

I know, it IS tough to imagine that you'll actually miss those days while in the midst of tantrums! Ha, ha! But as the saying goes, "this too shall pass." And then you actually look back on those moments and smile.

Mine are still little and the time seems to be flying by. I feel like one of these days I'll blink and it'll be time to post a message like yours.

I'm going to take a little extra time for snuggles today, and from now on. :)

Good girl, Anissa! You'll be glad you did. As a matter of fact, I'm going to make my teens gimme some snuggles today as well! Ha, ha!

thanks for visiting my blog.

My boys are now 4 and 6 so they are still young and at the stage of throwing tantrums, battling to see who comes out on top and of course the nice special moments in the middle when you hear them playing cats and Moms (the game in our house at the moment - not sure where this one came from - we don't even have a cat!). We emigrated to Oz nearly 3 years ago, our time here has flown because we have been so busy making a new life, then when I look around I don't see my babies anymore!
I wish I could freeze life as it is right now - well when eventually we get child number 3 - that's perfection for me!

Love this post! I cant believe how many similarities we have...my first born (also a daughter) was due on christmas day in 1991 and decided to wait until ten days later to show up. So she turned 18 on January 5th, right behind your daughter. She has a brother who turns 17 this weekend, and two other brothers (13 and 9) and it warms my heart whenever they squeak out loving interactions. (rare, but it happens...) I have bookmarked your post. I think I could love being your blogger friend!
judy
justonefoot.blogspot.com