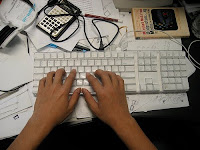 Once our daughter's high school play finished up in the fall, she tried unsuccessfully to get a job. You'd think retail shops would've at least been hiring temporary help in preparation for the holiday season. But, no.


So we decided that instead of looking for a job, her new job would be applying for college scholarships. Ideally, she's devoting around 10 hours a week—the same hours an outside-the-home part-time job would require—applying for scholarships.
Initially we were having her do all the legwork in terms of seeking out scholarships for which she was qualified. We quickly realized, however, this was using up too much of her time. So instead, her father and I became her assistants. It's our job to identify the scholarships. We turn them over to her and it's her job to research and write the essays, fill out the applications and submit them by their respective deadlines.
While using online searches, fastweb.com and a massive, 2-inch thick book on scholarships available across the country, I've encountered an awful lot of very specific, and er—unique scholarships.
The other day, after reading one entry, I sighed loudly to my hubs. "Oh darn it, honey. We could have had Ashleigh apply for this scholarship for nudists, but we would have had to have been practicing nudists for at least a year before applying. What a bummer!"
Without glancing up, he flipped a page of his newspaper and replied, "That's all right. We can join now. Then we'll be in plenty of time for Josh in three years."
Yup. Great sense of humor, that guy.
Anyway, in order to save you research time and help plan ahead for those not yet in the market for college scholarships, I thought I'd give you a quick summary of what's out there:

Oh, hey! I think I've actually found one for ya', Ashleigh! It's a scholarship specifically for left-handed people. This is great, it's worth up to $5,000! It—oh, wait. It says you have to be left-handed and attending Juniata College in Pennsylvania. Bummer.


Like I said. Very specific.
Image by: dbdbrobot
Posted by Name: Holly Bowne

Sadly, these scholarships are so incredibly weird, they have to be real!

And your helpfulness with your daughter reminds me yet again why I posted my rant against the magically disappearing adults in books for today's teens. Involved parents like you are far more the norm. My parents would've never helped me get scholarships. Paying for college was 90% my problem, not theirs. Different generation, different world.

i really hope she gets some good ones. But it really is a part time job

I can give bridge playing instruction, and it's free.:-)

I wonder who funds these scholarships. Maybe I don't want to know. It's both funny and depressing at the same time. What a waste of money. Perhaps they should offer scholarships for finding scholarships.

The vacuum coaters had me holding my side. These are hilarious. And I thought getting Ian into Kindergarten was wearing me out! Good luck Ashleigh!

Wow, they are rather specific, aren't they! The Klingon Language one made me giggle!!

Thanks for a funny look at applying for scholarships!

As a homeschooler, I have to play all the roles of teachers and counselors, and it's already wearing me out. I'm definitely handing the scholarship search task to the kids to deal with.

This is hilarious Holly! I think Ashleigh's assistants are incredibly thorough! If you can find those, you will most certainly find some that will work for her. Keeping a sense of humor about it is key...and I'm so glad you've done this legwork so that I can laugh my way through the process in 8 years or so.

Plenty of time to qualify for that nudist one. Just think of how interesting it will be when his friends come over. :)

All joking aside, you will be so glad you are doing this. My brother applied for everything, ones he qualified for and ones he didn't. He had all of his school, up through grad school paid in full with money left over to live on.

Thanks for the encouragment, Ivy! We're hopin'! Even enough to cover the first year would be awesome.