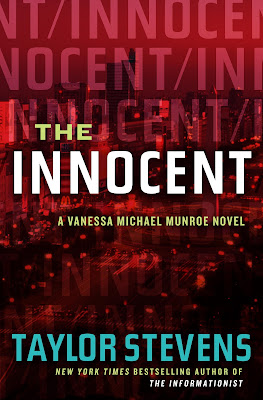 Vanessa Munroe gasped. Curtains in the room rustled lightly. The call to prayer sounded from minarets across the city and her hand was still gripping the handle of a knife plunged into the other side of the king-size mattress.

Awareness settled, and she let go of the knife as if scalded, rolling off the bed in the same movement.

The blade had struck twice and stood in silent witness to the increasing ferocity of the nightmares. The sheets were soaked with sweat. She glanced at her tank top and boxers. Drenched. And Noah, had he not left for work early this morning, would have been dead.

This is the second novel by New York Times bestselling author Taylor Stevens. In her first book, The Informationist, we’re introduced to Vanessa Michael Munroe. A woman with an unusual set of skills, in an unusual line of work. In The Innocent, we journey with Munroe into the secret world of a cult known as The Chosen. Several childhood survivors of the cult have banded together and hired Munroe to rescue Hannah, a child who was abducted eight years ago by the cult.

Faced with a world unlike anything she’s encountered before, Munroe must infiltrate this closed community. And struggling against her own increasingly violent nature, she must navigate her way among unpredictable cult members, their dangerous associates, and the impatient team who hired her, in her effort to save the child before the window of opportunity closes and Hannah is lost forever.

I have to say, author Taylor Stevens has won me over to the thriller genre. This book rocked!

Although I read a wide variety of writing, I hadn’t read many (if any!) thrillers before reading her debut novel last year, The Informationist. In this second book featuring the intriguing and powerful Vanessa Michael Munroe, Stevens balances plenty of gripping action and suspense with in-depth glimpses of Munroe’s more vulnerable side.

We also get to witness plenty of Munroe’s skills and chameleon-like abilities as she blends into the world of the religious cult. According to Stevens, this story contains autobiographical hints drawn from her personal experiences as a child growing up within the Children of God cult. Munroe is brilliant, tough and fearless with the gratifying abilities of a real-life superhero, able to extricate herself from the most impossible and life-threatening situations. Some may say she’s over the top, but I think she’s cool! I read books for escape, and this is an escape! I found The Innocent a true “thriller” in all that the word implies.

You can purchase a copy of The Innocent here.

Raised in communes across the globe and denied an education beyond the sixth grade, author Taylor Stevens broke free from the Children of God cult and now lives in Texas. She is at work on a third Munroe novel, The Doll.

Stay tuned for my interview with

*I purchased my own copy of this book and receive no compensation for my review besides the gratification that I'm helping a great author promote a great book.

Fabulous, Holly! I'm so glad you enjoyed this book also... I cannot wait to see your interview :)

I don't usually read thrillers, though I enjoyed the Jason Bourne movies a lot, unless it is couched within scifi, but this book does sound really gripping!