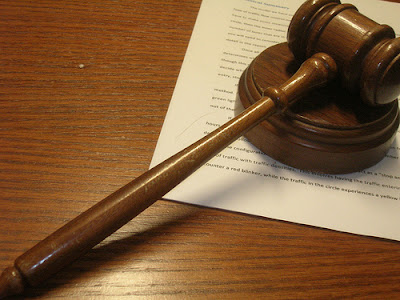 I reported for my first day of jury duty and, per my usual custom driving anywhere new, got lost. So I arrived a tad late. I caught the tail end of a video explaining how serving on a jury was the best thing we could do for our country next to military service. Hmmm…
Once it ended, a nicely dressed woman stood at the front of the room and using the exaggerated enunciation techniques of an elementary school teacher, explained to us how the day would go, and how soon they’d begin assigning us to different courtrooms.

Five-and-a-half hours later, all 150+ of us were still waiting. Ugh!

Finally, around 2:00 p.m. they rounded up 45 potential jurors, me among them. We were counted, re-counted, then marched into a courtroom to be “voir dire-d.” Okay, maybe it’s voir dit? But whatever. (It essentially means “they wanted to get the truth out of us.”) We were questioned by the judge and attorneys for 2-1/2 hours, and during that time I became aware of several distinct potential juror personalities.

THE DRAMA QUEEN (OR KING)

The life situations of these potential jurors are simply too traumatic, rendering them incapable of ever delivering a fair verdict.

“I take care of a police officer’s daughter at my daycare, and even though I only see the mother, if there were any police involved in this case, I can’t possibly be objective.”

“My cousin’s aunt’s friend’s sister was in an accident three weeks ago and I need to spend my days visiting her in the hospital.”

These people can summon tears--real tears--at any given moment. They can barely hold them back as they explain why they cannot possibly serve on a jury. A real estate agent sitting next to me dabbed at her eyes with a tissue while divulging the fact that she might have potential clients, whom she’d never met, coming in from Europe. And they might possibly want to buy a house, but now she’ll miss them because she’s here! *Sniff, sniff*. I noticed that the Weepers often went hand-in-hand with those exhibiting Drama Queen qualities.

To put it bluntly, these people are simply way more important than the rest of us ordinary citizens. Their jobs, income, families and lives would be way more affected by their absence during the day than the rest of ours would be.

“My daughter is signing her letter to play sports in college and I must be there. She won’t know what to do if I’m not.” (Now, that’s a scary thought. She’s planning to attend college yet can’t manage to sign her name without Daddy’s presence. Hmmm…)

These folks have cruises, airline flights, and other trips planned and they’re leaving in a month, so they can’t possibly serve on a jury now (on a case that might last a week). When would they have time to pack?!

Not everybody tried to get out of jury duty though…

These people have watched every episode of the old T.V. show, Lie To Me and they’re anxious to put all those micro-expression and body language reading skills to work.

“Oh Judge, I am very good at studying people and reading their body language cues to see whether they’re telling the truth or not. When I watch this stuff on T.V., I can always tell who’s lying!”


When all was said and done, I officially became known as Juror #14. Next week I’ll share my three secrets of success every juror should know about.


Courtroom Humor Side Note: After hours of exhaustive questioning and playing musical juror chairs, the defense attorney consulted his notes, then asked a potential juror, “It says here you work in construction. So, what do you do?” The judge said, “He builds things.” Everyone cracked up, and I just KNEW he was holding back the line, “But that’s not important right now. And please don’t call me Shirley.” Bah, ha, ha!

Wow. Did those people with tears and excuses get out of jury duty? I went once for jury selection and I think my judge took the greatest pleasure seating the people who tried to get out of it the most. :) His line: "We ALL have busy lives. This is your civic duty and you are as responsible to do it as everyone else here."

I didn't get chosen. I was bummed.

I look forward to hearing how it goes!

This reminds me of the time I served on a jury. It was rather an unpleasant experience. I guess it could have been worse. I did feel that I had done a civic duty well. Good for you and your attitude.

Surprisingly most of them did! I've heard from other people with judges similar to yours, Heidi. The judge didn't eliminate them though, it was the attorneys who gave most of them the boot.

That was certainly one of the most humorous accounts of potential jurors I've read! ;D Did you really get lost? You must be my twin! I come out of, say, Target, and can never remember where I'd parked the car. I rarely go anywhere by myself anymore...