After that last orthodontist appointment, no more money for fun stuff. Ha, ha, ha!
The entire week went by in a blur and I’m frustrated. I had all sorts of plans concerning what I would accomplish during that week. Aside from squeezing in some meaningful mother-son bonding time, I had several work-related goals I hoped to achieve. I was going to do some cold calling to crank up more commercial writing projects. Work on my novel, maybe start a new short story. By the way, check out my latest short story at: http://www.storiesthatlift.com/STL-stories/a-perfect-fit.htm.
And in my free time, I was planning to work on my scrapbooks.
Ha!

Sometimes I feel like I’m on an endless search for the elusive key to a balanced life. I wonder if I’ll ever find it. What is the secret of balance?
Posted by Name: Holly Bowne No comments: Links to this post

Every summer we set goals. What kind of goals, you ask? Well, for the past few years they’ve fallen into two categories. The first category includes the Lifeskills training I mentioned in one of my June Blog entries.

But the other category includes the fun goals. Just stuff we want to make sure we do before these sweet days of summer come to an end.

When our kids were little, their goals were so cute.

· Try to get all the way across the monkey bars without stopping.
· Learn to ride my two-wheeler all the way around the cul-de-sac.
· Put my face all the way underwater in the pool.
· Have ice cream for dinner.

Then, when they got a little older, their goals sounded more like…

Now we’re dealing with teenagers. And their summer goals tend to revolve around friends.

Our 16-year-old just returned from a week-long church camp. For two nights straight, as I kissed her goodnight, the last thing she said to me before I turned out the light was “I wish I was still at camp.”

Now at first blush, one might be thinking, gee, aren’t I fun to be around? In fact, that was something along the lines of what my hubby was thinking when I told him what she’d said. He thought this was not a good thing. “She’s letting her friendships have priority over family,” was the gist of his response.

But then I asked him, “When you were a teenager and in high school, who did you prefer to spend time with? Your parents or your friends?”

“My parents,” he replied without missing a beat.

Then he started laughing.

We both realize this is a normal transition phase that teens go through. That we went through. It’s one of those first steps in growing up—and away.

Sure it’s a little sad, but as with all phases of our kids’ development, there are pluses and minuses to each of them. I enjoy knowing our children are forging healthy relationships with good kids. And during the times we do have together as a family, our discussions have grown rich and interesting as we listen to our children develop their own ideas and views on things. Plus, now that they’re older we can all stay up later on summer nights playing games or watching movies with no guilt about missed bedtimes.

As our teens grow and change, and our summer goals evolve to meet those changes, there are some things that do steadfastly remain the same. Like for some reason they still want to join us when it’s and “ice-cream for dinner” night.
Posted by Name: Holly Bowne No comments: Links to this post

Quote of the Month

Don't tell me the moon is shining;
show me the glint of light
on broken glass.
(Anton Chekhov)
Posted by Name: Holly Bowne No comments: Links to this post

Email ThisBlogThis!Share to TwitterShare to FacebookShare to Pinterest
Labels: Writing

BTW, if you love baking and are interested in the RIGHT way to bake a cake (among other things), then check out this blog of my good friend's niece, Patti. She's an entrepreneur who has established a catering business, and is currently applying to the dietetics program at the University of Michigan. She blogs about cooking with some great recipes included! Hmmm...come to think of it, maybe I'll hire her for Joshua's next birthday cake. :)
Posted by Name: Holly Bowne No comments: Links to this post

You Take the Cake

We celebrated my youngest son’s f-ff-fourteenth birthday a few days ago. ‘Scuse me. I have trouble getting that out. My baby is 14! Ahem. Anyway, I used to be really creative in decorating my children’s birthday cakes.

I’ve never been all that great at the actual cake-baking part. In fact, my initial attempts would turn out dry with big clumps of cake sticking to the bottom of the pan even though I’d greased and floured my heart out.

After a couple of failed cakes, a friend of mine introduced me to Betty Crocker cake mix and fun-shaped single layer cake pans. She’d taken a cake decorating class and gave me a private lesson on how to form beautiful icing creations. I was off and running, designing elaborate Barbie, Harry Potter, soccer field and beach scene cakes. Finally, I could mask my lack of cake baking ability with pretty frosting techniques!

The trouble now, is that my kids have outgrown these single-layer cakes in the shape of animals and cartoon characters. For the past two years, my son has requested a traditional layer cake. So my true skills have resurfaced, and it ain’t pretty.

I think part of the problem is that I don’t get much practice. My hubby always wants cherry pie for his “birthday cake,” my daughter requests a super easy Bundt cake recipe with no frosting involved, and I refuse to make a birthday cake for myself when it’s my birthday. So I only make a “real” birthday cake once a year for my son.

My first attempt last year was a bit crummy. Literally. I couldn’t figure out how to frost the darn thing without getting cake crumbs mixed in with it. I managed to camouflage this frosting faux pas by covering the cake with decorative sprinkles. (Can I think on my feet or what?!)

But this year, the jig is up. I finally hit rock bottom.

When the two layers came out of the oven, they looked particularly rounded on top. My engineering-minded husband suggested I needed to lop the rounded centers off to make them level with the top of the pan.

I scoffed at him, “Nobody does that!”
He arched a brow, “Professional bakers do.”
“They do not! That’s ridiculous!”
“Okaaaay,” he replied in that voice you use when you’re letting the person know they’re making a big mistake, but you’re going to just go ahead and let them make it.

After the layers had cooled, I frosted the rounded top of one layer. Flipping the second layer upside down, I slapped its rounded belly up against the bottom layer, so I had a nice, new cake-pan flat top to work with. There was a good three-inch gap all around the edges, but no worries. I figured I’d just fill it in with frosting and nobody would ever know.

With the top frosted, I proceeded to the sides. As I worked, I noticed the top layer would slip to one side or the other, gliding down the hill of the cake layer below it. Instead of working like glue as I’d hoped, holding the top layer in place, the frosting was acting more like oil, creating a slippery slope. I kept shoving the top layer back up as I hurried my way around the sides, hoping that once I frosted that baby all the way around it would be permanently stuck in position.

Finally finished, I looked at my creation. Huge air holes kept popping open along the sides because of the giant gaps that lay hidden beneath. I patched the air holes and quickly covered the entire lopsided mess with my cake cover.

Dinner time came along and we ate Joshua’s favorite dinner of pizza, red grapes, and pop. Then it was time for the great unveiling.

I removed the cake cover and my jaw fell open. The precariously balanced top layer had literally cracked open along several fault lines. It looked like an earthquake had hit it. The entire family looked at it. Looked at me. Looked back at it.

We officially named it the “Happy Birthquake cake,” and ate it.

So are you ready for a picture? (If you have young children reading this blog with you, you may want to cover their eyes.) 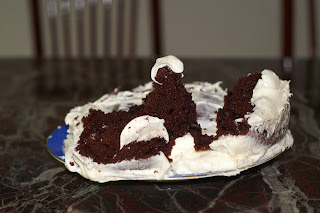 (Sigh.) Okay, I give up. I really do. I mean, I can admit that we all have special gifts and talents, and cake baking is absolutely NOT one of mine.

I wouldn’t want to deprive someone out there from using their special gifts and talents, would I? So look out bake shops, here I come!

Posted by Name: Holly Bowne No comments: Links to this post