Wow, it’s almost Turkey Day! A lot can happen in a year, can’t it? Last Thanksgiving we learned my husband had lost his job. With the holidays approaching things were looking pretty scary. We prayed a lot, tried to keep a positive attitude, and we made it through! It took several months, but he found a new job. We have so much for which to be thankful!

Check out my recent Prevention Buzz Blog post on how we try to foster a Gratitude Attitude in our children. And remember, no matter how bleak current circumstances may be, always try to find at least one thing to keep your Gratitude Attitude going strong.

On another note: just for fun, my mom sent me this online turkey quiz. I scored an 11! See how well you do:

At what point are moms supposed to stop butting into their children’s lives? (And no mom, of course I’m not talking about you. ;) I’m really struggling against the urge to butt in to a situation concerning my 16-year-old right now. We attended her cross country team banquet last week where something happened that has me spittin’ mad!

Let me back up.

It’s tradition for the cross country coach to announce next year’s team captains at the banquet. Typically the captains are selected from the (incoming) seniors. Well last year, the coach surprised everyone by also naming one junior as captain, along with the seniors. Fast forward to this year. The junior captain injured her toes at the beginning of the season and stopped attending practices and meets. I don’t know if any readers here have teens who participate in sports, but typically, an injured teammate will still occasionally show up for some games, or in this case meets, to offer team support. We’ve had other injured runners over the years (including my daughter) that made it a point to attend several, if not all of our home meets. But not the junior captain. Not one meet.

Now onto the banquet. It is the junior girls’ job to organize gifts for the departing seniors. It was down to a week before the event, and we hadn’t heard a peep out of Ms. Junior Captain. So my daughter and another junior stepped up to the plate and handled everything in a now crunch-time situation. But they did it! And the gifts were awesome, stupendous, wonderful! (Yeah, okay I did butt in a bit in helping decide what the gift should be.)

Anyway, $3 was collected to pay for said gifts from each member of the team, with the exception of one girl. You-know-who. Even after the girls made THREE phone calls to her!

I know I’m totally whining now, but bear with me.

Fast forward again to the evening of the banquet. The coach talked for THREE hours of the FOUR-hour banquet, and amongst her many speeches she went on and on about the wonderful leadership this junior has provided throughout the season.

Then the coach announced the captains for next year. She named You-know-who, then completely disregarded my daughter and the other incoming seniors who have been committed to the team for the past three years, and instead selected a handful of sophomores to become the new captains.

I was so angry I could barely contain myself. I bit my tongue. But since that night, I’ve drafted letter after letter in my mind to this….this coach, to let her know what I think of her decision-making abilities and her incredible lack of observation skills. Oh don’t worry, I haven’t actually put pen to paper…yet. I’m so tempted!

Of course my daughter was shocked and extremely upset by the situation. To her credit, she’s already met with this coach to express her feelings about the matter, but it wasn’t a very effective meeting. I’m proud of her for attempting to handle it; but I’m still battling the urge to butt in.

So what do you think? To butt in or not to butt in?
Posted by Name: Holly Bowne 2 comments: Links to this post 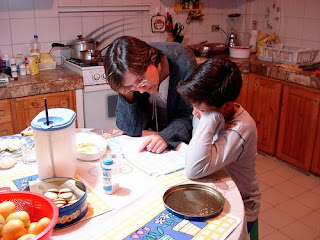 Why doesn’t anybody warn you that you get to do homework all over again once you become a parent? That should be in the book “What to Expect When You’re Expecting,” shouldn’t it?

Check out my new take on the whole homework situation posted on my recent Prevention Magazine Buzz Blog entry "Stressed Out Over Homework--And It's Not Even Mine!"

Image by: Peter Gene
Posted by Name: Holly Bowne No comments: Links to this post

Is Dancing Becoming a Lost Art? 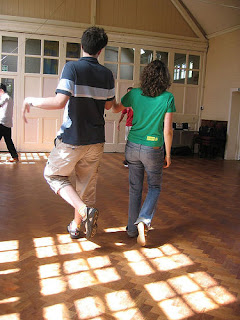 Throughout middle school, high school and college, I regularly attended dances and had a blast dancing with my friends to the popular tunes of the seventies and eighties. (Yeah I know, I’m totally dating myself here!) I studied dance--ballet, tap and jazz--throughout my childhood and teen years and grew to appreciate the artistic expression of music through movement.

My daughter recently attended her high school Homecoming Dance with a group of male and female friends which, on a side note, I think is GREAT! When I was in high school you either had a date, or you didn’t go. But anyway, back to my topic of dance…

Despite the popularity of shows like Dancing with the Stars and So You Think You Can Dance, I’m concerned that dancing is becoming a lost art. When my parents and grandparents went to dances they really danced. They waltzed, rumba-ed, and fox-trotted their ways around the floor. And my generation, well, we danced. (Disco counts, right?)

But as I sat talking with my daughter about the events of the evening, and “casually” asked if she’d danced with any boys, she replied, “No, mom. Besides, nobody really dances anymore anyway.”
“What do you mean?”
“Well,” she paused delicately. “The dance floor is pretty much divided into two areas. The center is the ‘mosh pit.’ It’s a big group of kids all squished together in the middle of the dance floor where everyone basically…” she hesitated again.
“Basically what?”
“Well, they pretty much have sex with their clothes on.”
“What?!”
She explained the ‘dance moves’ going on in the mosh pit and I was flabbergasted.
She continued, “On the outer edges of the mosh pit are more couples doing the same moves as the kids in the mosh pit--except they just have more room—then there’s the rest of the kids who just jump up and down to the music.”

I was shocked, and the more I thought about it, disappointed. What’s happened to actual dancing?

I read an article about a community program offered in Rancho Bernardo, California. It would be so awesome if programs like this were implemented across the country. The senior citizens of the area teach children ballroom dancing through the school district’s physical education program. Every year they teach over 1500 students the fox-trot, waltz, rumba, swing and merengue. And the kids love it!

Teens today are missing out on how even simple steps like the cha-cha, can be so cool. And remember the infamous scene in the 1992 movie, Scent of a Woman? The one where the blind character played by Al Pacino dances with a young woman. Not that I want to in ANY WAY encourage inappropriate dancing amongst teens, but if they’re looking for hot dancing, can it get much better than this?

Scent of A Woman Tango Scene


I’m sad. What do you think? Is dancing becoming a lost art?